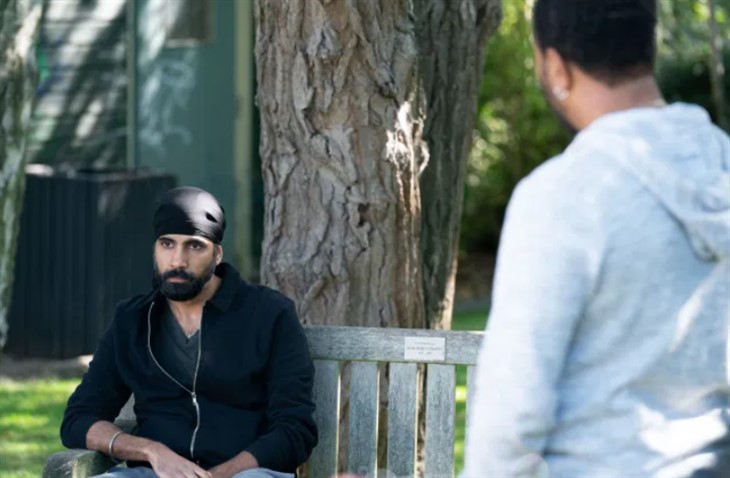 Eastenders spoilers reveal that Kheerat Panesar (Jaz Deol) shared a moment with Mitch Baker (Roger Griffiths). It is when Kheerat told him why he had Chantelle Atkins’ (Jessica Plummer) memory box. The two men had a conversation, but there were also things that didn’t need to be said out loud. Deol explained that they both feel like they failed to protect Chantelle.

When Kheerat and Mitch discovered that Chantelle died, it was devastating and shocking to them both. Even though the police have questioned Gray Atkins (Toby-Alexander Smith), he knows exactly what to say and how to act. However, Kheerat did get the opportunity to tell Mitch that Chantelle wasn’t happy and was going to leave Gray.

Eastenders spoilers reveal that Gray has a perfect public image, with the exception of a few people who see through him. Deol told Digital Spy,

“The tragedy is he just doesn’t have the evidence to prove it… Gray is a solicitor by trade so he knows how to exploit the legal system better than anyone else… he’s well aware Gray is Albert Square’s knight in shining armor. After all, he’s helping Whitney in her ongoing trial so how could he possibly be Chantelle’s murderer?”

Now, Kheerat is just starting to consider the possibility that Gray might have caused Chantelle’s death. His mother, Suki Panesar (Balvinda Sopal) is urging him to stay out of it and not say anything. However, he’s having a hard time doing that because of his grief and shock. So, he ends up sharing his theory with Mitch, who then tells Karen Taylor (Lorraine Stanley).

Mitch will think about things, especially remembering the fearful look on Chantelle’s face the last time he saw her. After Kheerat shares his theory, Mitch will start to add things up in his head. He will also start to hear the whispers from everyone else. Mitch will begin to really wonder if Gray did something to Chantelle that night.

Mitch will have inner rage, but also guilt because he will feel that he failed to see all those warning signs, especially on that last day. Kheerat will also feel responsible because she trusted him and was counting on him to help her. The actor said,

EastEnders Spoilers: Gray Not Getting Away With Murder, New Evidence Discoveredhttps://t.co/dAakvm7l3a

“Knowing Mitch’s history with Gray, Kheerat is playing on the heartstrings of a man that wasn’t able to protect his baby girl because he couldn’t protect Chantelle either. It’s something that they can both connect with. That feeling of helplessness.”
Be sure to catch up on everything happening with the soap right now. Come back here often for Eastenders spoilers, news, and updates.