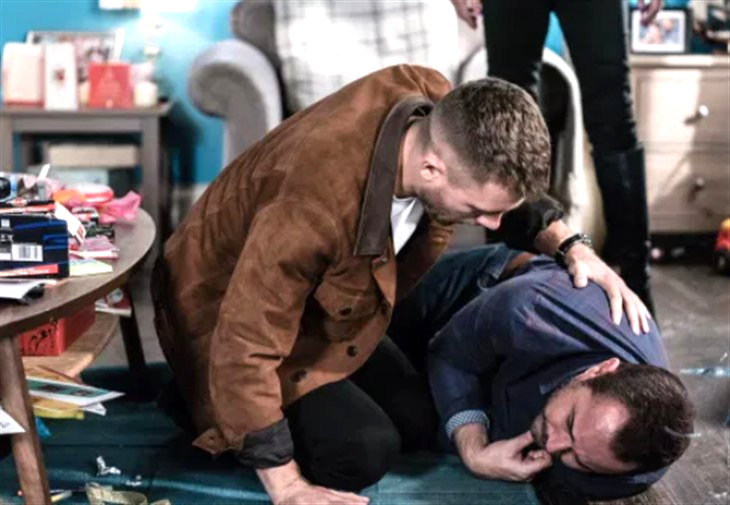 BBC Eastenders spoilers for the week of October 5 reveal that Mick Carter (Danny Dyer) crumbles under the pressure during Whitney Dean’s (Shona McGarty) trial. He ends up having a panic attack and collapses in court. Then, Frankie Lewis (Rose Alyling-Ellis) explains why she’s stalking the Carter family. Also, Suki Panesar (Balvinda Sopal) betrays her own son and more.

Eastenders spoilers for Monday reveal that Mick panics when he learns that Frankie is watching Ollie Carter (Harry Farr). He finds them at the park and demands to know why Frankie is so interested in his family. She reveals that Mick might be her biological father.

Gray Atkins (Toby-Alexander Smith) is stressed to the max and learns Chantelle Atkins’ (Jessica Plummer) funeral is on the same day as Whitney’s first hearing. One of his co-workers wants him off the case, but Gray insists that he needs to keep working.

Meanwhile, Suki finds Jags Panesar’s (Amar Adatia) jeans covered in blood. When he ends up announcing his relationship, Suki gets revenge by committing the ultimate betrayal.

In Tuesday’s episode, secrets continue to bubble under the surface and it will affect Mick and Linda Carter’s (Kellie Bright) marriage. Callum Highway (Tony Clay) is told to start wearing a wire. Also, Whitney is terrified about trying to get through court without her attorney. At the same time, she tells Gray that he needs to be at Whitney’s funeral, but he refuses. Also, Ash Panesar (Gurlaine Kaur Garcha) will be horrified by Suki’s actions.

On Thursday, it will be the day of Chantelle’s funeral and Gray struggles to keep it together. Something shocking ends up happening at Whitney’s trial. Suki will demand more rent from the Slater family. The Panesar matriarch claims that she can ask for more money since there are more people living in the house now. Meanwhile, Jean Slater (Gillian Wright) warns Kush Kazemi (Davood Ghadami) about online gambling.

EastEnders Spoilers: Gray Not Getting Away With Murder, New Evidence Discovered https://t.co/xTzpKVBrwp pic.twitter.com/WxWRMQbmoP

Eastenders spoilers also reveal that Mick is answering the prosecutor’s questions at Whitney’s trial, but ends up being affected by the pressure. He has a massive panic attack and collapses in court. Meanwhile, Mitch Baker (Roger Griffiths) professes his love for Karen Taylor (Lorraine Stanley).

Which storyline are you looking forward to the most next week? What do you predict is going to happen with your favorite characters? We will keep you posted with new developments and updated information as it becomes available.

Days Of Our Lives Spoilers Next Week: Eli Saves Lani, But It Might Mean Losing Her Forever