Eastenders Spoilers Next Week: Ian And Isaac Both Threatened, Phil Warned And Linda Gets Caught 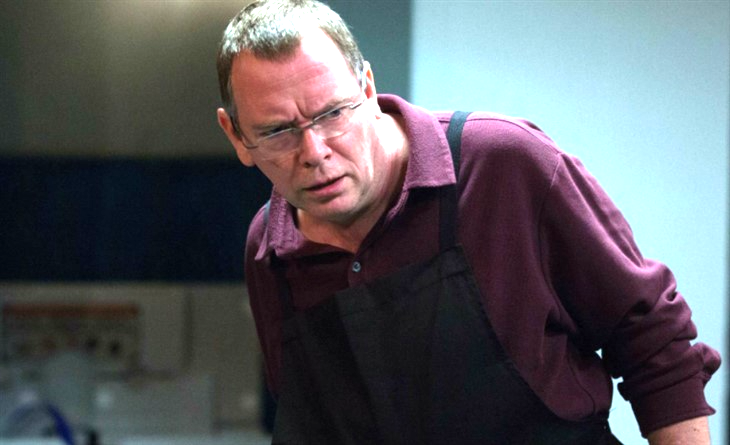 Eastenders spoilers for Monday reveal that Ian has a business meeting, but Max Branning (Jake Wood) interrupts once again. He wants his money and he’s not going to give up until he is repaid. This time, Max will burst in the door and threatens Ian. He either pays back everything he took with interest or else.

Isaac will end up in a tense situation and Denise Fox (Diane Parish) defends him. Also, Mick Carter (Danny Dyer) will realize that Frankie has been taking pictures of Ollie Carter (Harry Farr). He tells Frankie to delete the photos, saying Linda would be concerned about their privacy. Meanwhile, Kheerat Panesar (Jaz Deol) explains himself to Karen Taylor (Lorraine Stanley).

On Tuesday’s episode, Callum will look through paperwork at The Arches when Danny Hardcastle (Paul Usher) comes back. The villain fires off an accusation just as Phil walks in. Then, Danny gives Phil a stern warning about Callum.

Also, Sheree Trueman (Suzette Llewellyn) will talk to Denise about Chantelle Atkins’ (Jessica Plummer) death. Something Sheree says strikes a chord with Denise, who disappears shortly before the wedding. Plus, Max will once again threaten Ian over the money he stole, while Mitch Baker (Roger Griffiths) and Karen bond over Chantelle’s death and end up sharing a kiss.

On Thursday, Isaac is threatened and Denise is confronted over the belief that she is having an affair. Meanwhile, Callum has a hard time after a deadly car accident and ends up having to talk to a support officer. Mick will do another shift at Prince Albert, but Frankie keeps asking personal questions about his family. It will just make him even more suspicious of her.

Plus, Jags Panesar (Amar Adatia) gives tenant leniency with the rent, which Suki Panesar (Balvinda Sopal) doesn’t approve of. Then, Ian finds a way to get back the upper hand.

EastEnders Spoilers: Kheerat And Mitch’s Moment, Both Failed To Save Chantelle https://t.co/fYmkv70QtF pic.twitter.com/nu6WlsX7W9

Eastenders spoilers for Friday reveal that Mick is becoming concerned about Linda being around alcohol. She ends up getting irritated at Mick treating her like a child, so she sneaks a sip of a real drink. However, Max ends up catching her. Linda is horrified at what she has done and ends up opening up to him about what she is going through.

Gray Atkins (Toby-Alexander Smith) will lash out at Mitch. He claims that Mitch made his life miserable, was a terrible father, and tried to turn Chantelle against him.

Meghan’s Cheerleader At it Again – ‘Duchess Is Going To Be President In 2024!’