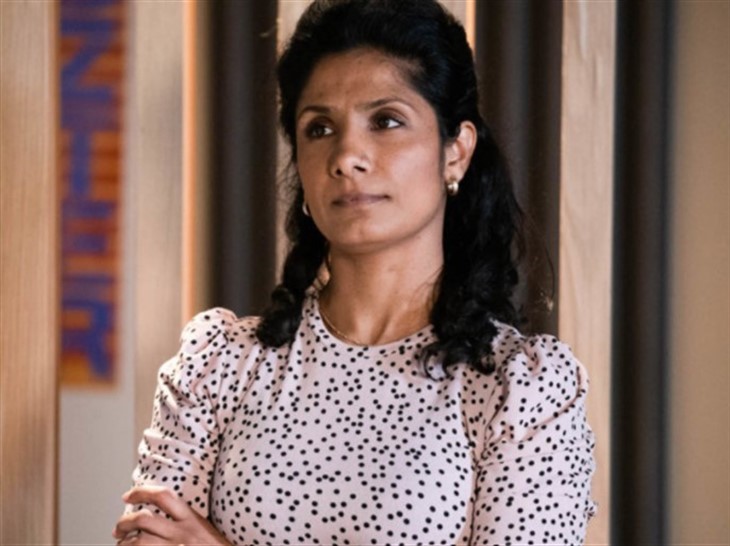 BBC Eastenders spoilers reveal that Jags Panesar (Amar Adatia) is going to be written out of the soap soon. When he announces his romance with Habiba Ahmed (Rukku Nahar), Suki Panesar (Balvinda Sopal) is secretly furious. It is confirmed she commits the ultimate act of betrayal, but what could this be? Will she end up allowing her son to go to prison?

Eastenders Spoilers – Covering And Protecting Too Many Times

Suki goes to great lengths to protect her family and even brainstorms ways to cover up their mistakes that could affect how the family is perceived. Recently, Jags thought he came up with a great plan when Ruby Allen (Louisa Lytton) had her identity stolen. Due to this, and the pandemic, she wasn’t sure if she would be able to open the club again. So, the two worked together to come up with a robbery and insurance scheme.

However, it didn’t go according to plan and Suki ended up coming to “fix” things. During the upcoming week, Suki is going to find Martin Fowler’s (James Bye) blood is still on Jags jeans. She worries that the police will search the flat, but is relieved to find out they have no suspects.

Eastenders spoilers reveal that Jags announces he is in a relationship with Habiba Ahmed (Rukku Nahar). Even though Suki appears to be happy for them on the outside, she is secretly seething. Once again, she believes that Jags is bringing trouble and embarrassment onto the family.

According to Metro, Suki will commit the ultimate betrayal as a way to punish Jags. There are a lot of theories going around, including that Suki murders her own son. However, there might be another ending. One that will explain the actor’s exit, but keep the door open for a return in the future.

Eastenders spoilers reveal that Ash Panesar (Gurlaine Kaur Garcha) is horrified and shocked by what Suki does. Could it be possible that she tips off the police and tells them that Jags committed a crime? Will she actually send her own son to prison for robbery and assault?

We have seen Suki do some pretty shocking things, so it’s entirely possible. To find out if this is her plan, we will have to keep watching the soap.