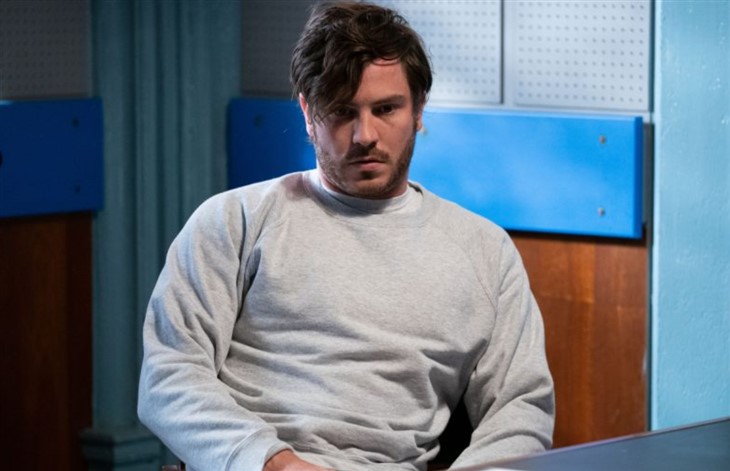 Eastenders spoilers reveal that after Gray Atkins (Toby-Alexander Smith) reported Chantelle Atkins’ (Jessica Plummer) death, he was questioned. However, many fans fear that he is going to get away with murder. That probably won’t be the case because spoilers confirm that police will get new information in the case. The police pay Gray a visit after the discovery.

Last week, we saw the intense confrontation between Gray and Chantelle. It led to the two of them fighting, Gray threatening his wife and Chantelle announcing that she was walking out the door. Then, Chantelle ended up severely injured and she told Gray that she couldn’t feel anything and couldn’t move.

Knowing that she was close to death and not wanting his secret to get out, he left her there. She spent her last moments knowing it was the end of her life and she was all alone. He left to go get milk and threw the money in the trash bin down the block. He made awkward small talk with Suki Panesar (Balvinda Sopal). Wasted just enough time so Chantelle would be gone by the time he got back. Then, he staged things just precisely, including shattering the milk so it looked like he dropped it out of shock over finding Chantelle’s body.

Eastenders spoilers reveal that Gray has already gone through the initial questioning by police. When he is let go, viewers were concerned that Gray was going to get away with killing Chantelle. However, don’t jump to conclusions just yet. This is just the very beginning of the investigation. Plus, there is a tidbit that suggests the police will go back to Gray later this week.

According to Digital Spy, on Friday’s episode of the soap, new information will be discovered in the case. This leads to the police surprising Gray with a visit to his front door. He will be forced to answer even more questions. What exactly is this new information? Is it evidence or does someone tell the police that there was suspected abuse in the marriage?

EastEnders Spoilers – Not Getting Away With Murder

Eastenders spoilers reveal that Chantelle’s story brings to light an important topic that affects millions of women, children (and even men) all around the world. Plus, Chantelle was a well-loved character and to have her killer go free would have fans furious.

There are also innocent children involved. We already know that Kheerat Panesar (Jay Deol) is going to share his killer theory with Mitch Baker (Roger Griffiths). Plus, Mitch will go into a rage when he hears everyone gossiping about Chantelle’s life… and death.