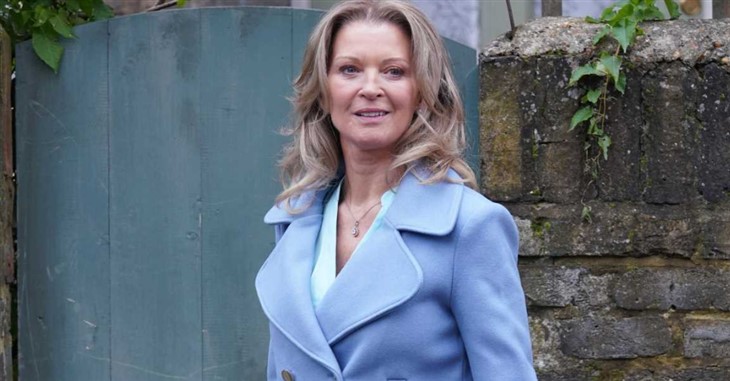 Eastenders  – Gillian Taylforth (Kathy Beale)and she recently spoke about what is coming up for her character during a segment of Secrets From the Square. Keep reading to get the details.

During Secrets From the Square, Taylforth appeared along with her on-screen son, Ian Beale (Adam Woodyatt). It was confirmed that Kathy will embark on a new adventure: online dating! She downloads a dating app and signs up. The actress explained,

“Kathy is going to go on a dating app. It’s about time, she is older now. She’s been looking after everyone else, it’s about time she was looked after and had a bit of love in her life. She needs a nice gent in her life – who knows, she could meet the man of her dreams!”

In the past, Kathy has been what some might call unlucky in love. She’s had several romances. However, many of them ended up dead. Now, she’s not a “black widow” by any means, but it could look that way to some people. Then, Woodyatt joked that Kathy’s next lover would have a short contract.

Then, there was Kathy’s own death — Ian found out that she “died” in an automobile accident in South Africa. However, nine years later she was “resurrected.” The truth was that Kathy was tricked into faking her death by Gavin Sullivan (Paul Nicholas).

She was also involved with Phil Mitchell (Steve McFadden) and the two had a son together, Ben Mitchell (Max Bowden).

EastEnders – A Chance at Romance Or More Heartache?

It is unclear if Kathy will actually have a chance at a real, lasting romance or if she could attract some bad men on the dating app. What would you like to see happen with Kathy Beale?

Will she find a forever love? Or is she doomed in the romance department? To find out, we will just have to wait for new episodes of Eastenders to air in September 2020.

Be sure to catch up on everything happening with soaps right now. Come back here often for Eastenders spoilers, news, and updates.