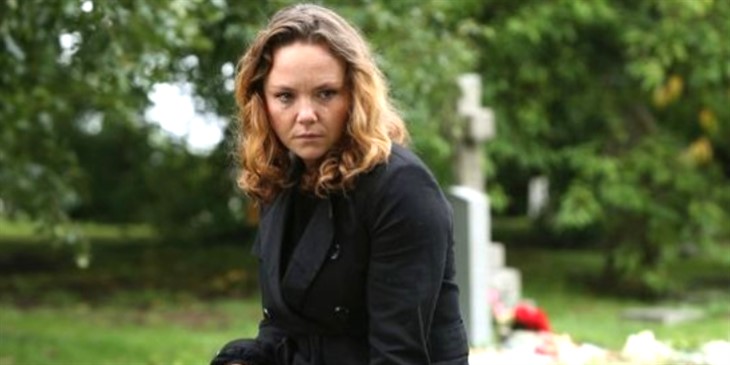 BBC EastEnders spoilers reveal that Janine Butcher is a dead woman walking, and the BBC soap actually toyed with the idea of killing off Charlie Brooks’ character years ago. Of course, if EastEnders had axed Janine from Walford, we would have missed out on some of the most shocking murder twists to date.

Charlie Brooks’ name rings bells among EastEnders fans. It seems like there are always new rumors popping up teasing Janine Butcher’s scandalous return, and who wouldn’t want to see the Black Widow come to wreak havoc on the BBC soap again? Anyone who has murdered three out of four of their husbands is sure to make good TV.

Shocking new EastEnders leaks reveal that Janine Butcher almost didn’t make the cut and was nearly killed off the soap after her first husband. That would have certainly been a shame.

Longtime EastEnders fans will recall the shocking scenes between Janine Butcher and Barry Evans (Gary Beadle) on the rocky cliff where he met his demise. The married couple went for a hike, Janine shoved her hubby after an argument, and he lost his footing and fell to his death. While Janine certainly wasn’t in love with him, and more or less despised him, she certainly didn’t mean to kill him.

A shocking old EastEnders photo hit the internet this week, showing the very cliff where Barry Evans fell to his death. But, instead, it was Janine Butcher lying on the ground “dead.” Can you imagine what EastEnders would have been like if the writers had killed her off then in 2003?

Fans were certainly confused by the alternate death ending. Some rumors hint that the writers were seriously considering killing Janine off rather than her husband and had a change of heart at the last minute. Another popular theory is that back in the day EastEnders would film several endings for big scenes to prevent leaks, the cast and crew actually didn’t even know which character was going to die until the scenes aired on TV.

Regardless of the questions, we all have, we’re glad Janine Butcher got to stick around and continue her reign of terror on Walford. Would you like to see her return one day? Share your thoughts in the comments below and check back here for more EastEnders spoilers and updates.

Misty is a great gossipy gossip that we just couldn’t live without here at Soap Opera Spy…When she isn’t spreading the news of Reality TV here, especially Big Brother you will most likely find her on Rodeo Drive…. window shopping. Yes, retail is her second passion.