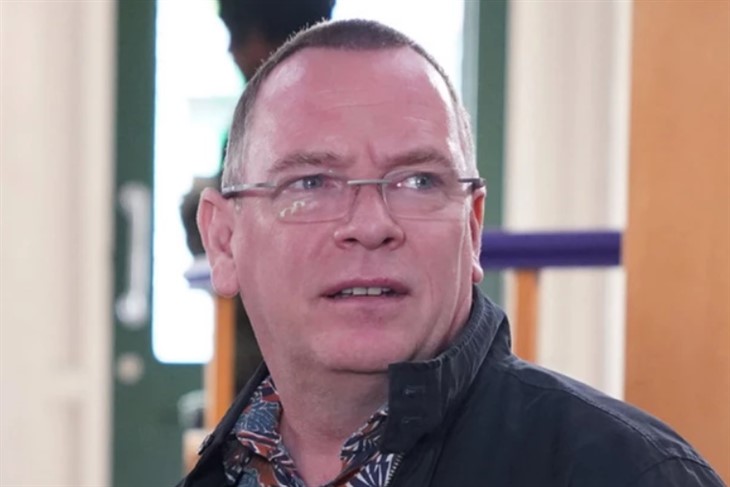 BBC Eastenders spoilers reveal that Ian Beale (Adam Woodyatt) is part of a huge storyline involving Sharon Watts (Letitia Dean). She has no idea that he was responsible for her older son’s tragic death. Just as the soap is about to return next month, it is reported that Woodyatt is taking a break from the soap. What happens with Ian’s storyline and when will the actor return?

Before the soap went on hiatus, we were left with a big cliffhanger. Ian and Sharon bought Queen Vic and will be running it — as well as living in the pub — together. This happens right about the time that the pandemic causes a lockdown. We don’t know what is happening during that time, but Woodyatt previously teased that Ian would have major financial issues. We also know that he ends up stealing every last penny from Max Branning (Jake Wood).

This is in addition to his already murky predicament of Sharon one day finding out his role in Dennis Rickman’s (Bleu Landau) death. He has worked overtime to keep it a secret, but Dotty Cotton (Millie Zero) knows the truth. He thinks that he has dealt with her, but she could try telling Sharon the truth… even if she isn’t believed.

According to Daily Star, Woodyatt is leaving Eastenders. Now, does Sharon find out the truth about her son’s tragic death? Does he get into some major trouble over stealing all of Max’s money? Does someone make him disappear or does he go away on his own for a reason? Well, we know that it’s a temporary exit, so Ian will be back. But that’s not all that was teased.

While off-screen, Ian will have another huge storyline, Digital Spy shared.. It is teased as something new, so we don’t think it’s related to Dennis’ death. Of course, sometimes soap writers start weaving things together until there is one massive central plot that ties several storyline branches together. So, this is always a possibility.

As for how long Ian will be missing from Eastenders, spoilers do not give that away.

EastEnders Spoilers – What Else is Known About Soap’s Return?

It is confirmed that new episodes will return on September 7. The last time it aired a fresh installment was in June. Now, Ian is not the only one who will have major storylines when the soap returns to the air. Others to expect include Sharon, Gray Atkins (Toby-Alexander Smith), Chantelle Atkins (Jessica Plummer), Mick Carter (Danny Dyer), Linda Carter (Kellie Bright), Ruby Allen (Louisa Lytton) and Denise Fox (Diane Parish).

Executive Jon Sen teased what fans can expect from Eastenders 2.0, “From the moment we turned the lights out in Queen Vic our ambition was to come back with a bang and this autumn certainly does that. As soon as Albert Square reawakens the drama returns at a pace and, although working within social distancing guidelines has certainly given us some new challenges, I am incredibly proud of what everyone has achieved. The show is looking fantastic and we can’t wait for ‘series two’ to begin…”.