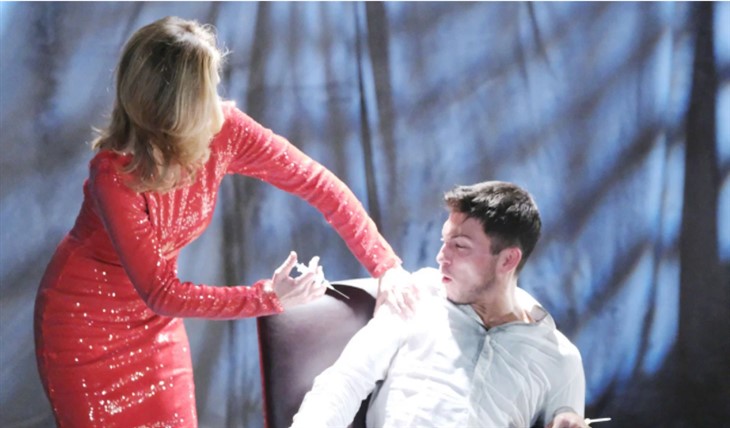 NBC Days of Our Lives spoilers reveal that Eve Donovan (Kassie DePaiva) isn’t done with her revenge yet. She had Vincent (Michael Teh) intercept Ben Weston’s (Robert Scott Wilson) appointment with Dr. Marlena Evans (Deidre Hall). That is when it was discovered that Ben’s nightmare is far from over. The actor explained that bad feels good to Ben, and vice versa.

DOOL spoilers reveal that Paige Larson’s (True O’Brien) death anniversary is coming up. That makes Eve’s grief even more agonizing. All of this time, she has tried to get Ben to pay the price for murdering her daughter. Even though Ben is a reformed serial killer and only committed the crimes during a mental breakdown, Eve still wants justice.

She knows killing Ben would be way too easy. She wants him to feel the anguish she feels every single day. To her, the only solution is to compel Ben to kill the person he loves most, Ciara Brady (Victoria Konefal).

Days Of Our Lives Spoilers: Tripp And Allie Raise Baby Together, Paternity Bombshell Ahead?

Ciara and Hope Brady (Kristian Alfonso) were relieved when they found Ben. The two women thought that the nightmare was over and Ben had been saved. However, Ben is dealing with the aftereffects of being brainwashed and psychologically tortured. Ciara knows he is struggling, but assumes it’s from the trauma. The new bride does realize that it’s serious and that he needs to talk to a psychiatrist. This leads him to make an appointment with Marlena.

Unfortunately, Vincent blindsides Ben at Marlena’s office. Despite his insistence that he would leave Ciara if there was any chance of hurting her, Vincent shows Ben who is in control. Ben finds himself powerless against Vincent, the brainwashing, and the drugs that are still in his system.

Days of Our Lives spoilers reveal what is actually going through Ben’s head. The actor told Soap Opera Digest that there is a bit of a reversal when it comes to how things feel. All the bad stuff makes Ben feel good, while the good things — like Ciara’s love — make him feel bad.

“All the things Ben worked to get beyond, like attempting to kill Will [Horton, Chandler Massey] and murdering the others, Eve brainwashes him, so pretty much all the bad things are good, and the good things are bad.”

Days Of Our Lives Spoilers – The Power of Love

Right before the brainwashing story began, Wilson explained that a story like this must have a component of love. That by the end of this nightmare, it should show that love conquers evil. With soaps, the power of love is commonly used.

So far, Ben’s love for Ciara has prevented him from strangling her. However, will it end up being too much for him to overcome? Or the love that “Cin” shares strong enough to conquer anything?

TLC ’90 Day Fiance – The Other Way’: Jenny And Summit Upgrade Home While Bracing For Parent Talk