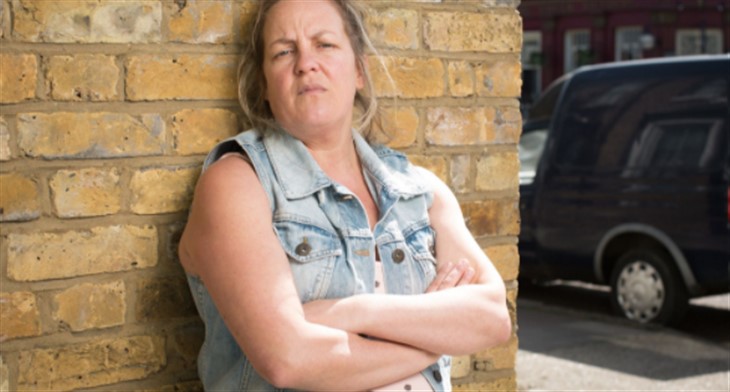 BBC Eastenders spoilers and updates reveal that the Taylor family will get a big storyline when the soap returns with new episodes. There will be some dark secrets that end up surfacing and Karen Taylor (Lorraine Stanley) will be challenged. Find out what to expect from the character, as well as Keegan Butcher-Baker (Zack Morris).

Secrets From the Square has been giving us tiny tidbits while the soap is not airing. Eastenders is supposed to return next month, so what can we expect? Stanley couldn’t give too much away, but she did suggest it affects the entire family. The actress also confirmed that Karen is “challenged,” per Digital Spy.

EastEnders Spoilers: Is Evil Trevor Morgan Returning From The Dead?

Morris also talked about what Eastenders fans can look forward to. As fans know, Keegan has gone through a lot, including racial profiling by the police, blamed for crimes he didn’t commit, and having his food truck vandalized. It is understandable why he has so much anger bubbling under the surface. As a result, he thought it would be better to distance himself from his wife, Tiffany Butcher-Baker (Maisie Smith).

The drama isn’t over yet, though. There are still some unresolved storylines involving Keegan. Plus, he teased that the Taylor family will be exposed, as well as some dark secrets.

“Yeah, it’s going to really expose the Taylor family and expose some dark secrets that have been going on.”

One piece of good news for Keegan is that he reunites with his bride, Tiffany. They were married very young and hadn’t dated that long when they tied the knot. A lot of people were against the marriage and went overboard trying to stop “Teegan” from walking down the aisle. Ultimately, Teegan and Tiffany did get married, but life hasn’t been easy for the couple.

“They’ve made up. They were having some problems and relationship issues. They’ve made up and they have moved back in together, so it could be quite nice. It’s EastEnders though so they will be something to test them.”

What do you think are the dark secrets that end up being exposed? How exactly is Karen Taylor challenged and how will this affect Keegan and the rest of the family? Does this have something to do with Karen, Keegan, or perhaps it has to do with Chantelle Atkins (Jessica Plummer)? We will have to wait for new episodes to find out.