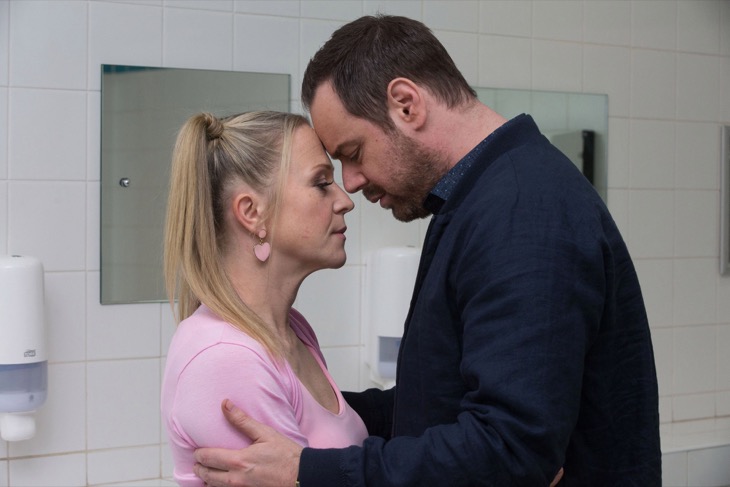 BBC EastEnders spoilers and updates reveal that Mick Carter (Danny Dyer) and Linda Carter (Kellie Bright) have had more than their share of ups and downs but could this year finally be the end for the once loved-up couple?

They debuted in 2013 and the list of tragic events they’ve endured is long. They have always seemed to be in financial trouble and Mick struggles with panic attacks. Linda was raped by Mick’s half-brother Dean Wicks (Matt Di Angelo) and their son Ollie was diagnosed with autism.

And yet the childhood sweethearts have managed to weather this and moreover the years.
But have they finally come to their breaking point?

EastEnders spoilers – Are Mick and Linda Carter destined for divorce?

Linda especially has been hard hit by the family’s domestic woes and has turned to alcohol as a coping mechanism for dealing with her son’s condition and her husband’s health.

The unfortunate consequences have been destructive and range from her verbal abuse of Mick to wetting herself in front of friends and neighbors. She was even involved in the kidnap of Keanu Taylor (Danny Walters) when she accidentally lurched into Martin Fowler’s (James Bye) van.

EastEnders spoilers – Are Mick and Linda Carter destined for divorce?

The last straw may have come with her near-drowning during the tragic boat party crash. Booze was involved and at that time she had an epiphany about her life which led to Mick and Linda selling their pub, Queen Vic, to Phil Mitchell (Steve McFadden) so she can work on her recovery.

EastEnders spoilers – The experts speak out about the Carters’ relationship

In an effort to ferret out what the Carter’s ultimate fate might be, Express.co.uk has asked experts to weigh in on the family drama.

Relationship advisor Nia Williams said she doesn’t see a bright future ahead for Mick and Linda. “In 2019 on New Year’s Eve, we watched in horror as Linda’s alcoholism reached its lowest point. The truth is that no matter how much you love someone we all have our personal limits and when a relationship becomes too volatile, humiliating and disrespectful, then love alone cannot hold it together.

Mick has endured some excruciating and embarrassing moments with Linda due to her drink issues. If Linda refuses to change and be honest, open, and respectful to her marriage, it will not be sustainable in the long run because quite simply, love is not enough.”

EastEnders Spoilers: Ben Mitchell’s Deaf Diagnosis – Will He Ever Be Able To Hear Again https://t.co/eHiX7v564d pic.twitter.com/jhkDVvUZXb

Martina Mercer, Editor at Sunday Woman Magazine notes, “In the first year during recovery, it’s recommended that addicts don’t start any new relationships or make any big decisions, while addicts are also encouraged to change their lives, saying goodbye to old habits and triggers. Will Linda realise that it’s not the pub that’s a trigger but it’s actually Mick? They’ve been together since childhood, but when Linda delves deeper into her own psych, she may discover that dealing with her marriage, and her insecurities surrounding it is what often turns her to drink.”

Relationship coach from Iphie Mottoh said, “Mick and Linda should be heading for a divorce based on all that they have gone through as a couple. However, Mick and Linda aren’t like other couples. They grew up together, they have been best of friends, there is an intimacy between them.”

We’d like to hear what you think will happen to Mick and Linda!

Days of Our Lives Spoilers: Is Claire Good Or Bad This Time? Olivia Rose Keegan On DOOL Return