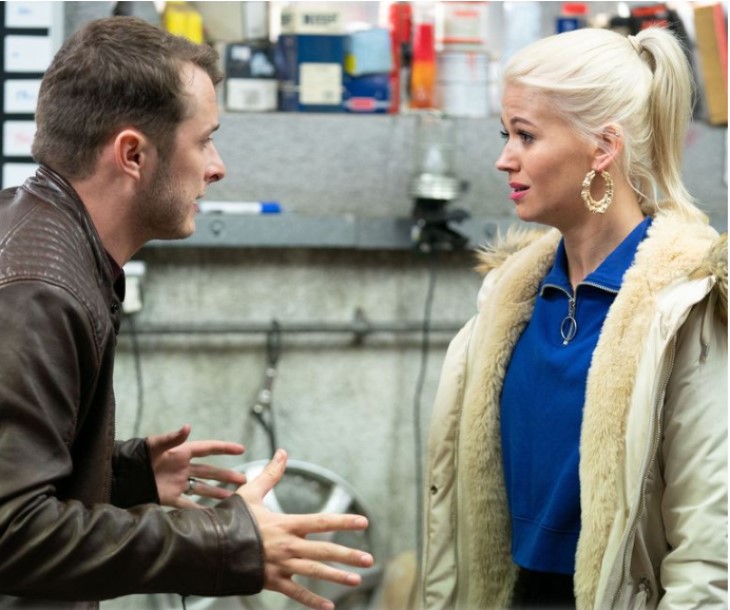 BBC EastEnders spoilers and updates reveal that a spectacular, huge showdown takes place in Walford this week between Lola Pearce (Danielle Harold) and Ben Mitchell (Max Bowden). How will the angry encounter turn out after her epic Peter Beale secret is exposed?

Lola is devastated when Ben discovers the truth about her night with Peter Beale and throws it in her face.

Ben has been struggling to return to full health over the past few weeks. In spite of that, or maybe because of it, he is clinging to the hope that he can prove to his dad Phil Mitchell (Steve McFadden) that he is capable of joining him on a dangerous job.

But for all his careful planning and meticulous worrying, he could not have expected the wrench that comes into his plans. On the day of the big job Ben sees Lola and is distracted which leads to him almost being hit by a car.

Lola is the mother of his young daughter and she is with Peter Beale (Dayle Hudson) which leaves Ben suspicious.

An angry Ben confronts Lola about what she’s doing and as things quickly escalate her boyfriend Jay Brown (Jamie Borthwick) quickly moves to throw dirt on the fire.

Later, Phil and Ben go over the job but he becomes frustrated when Ben can’t hear him well. Then, when Ben pulls what he thinks is a smooth move by showing Phil his gun, Phil has had enough and fires him from the job.

Upset, Ben takes off to try and find Lola and question her about what’s going on with her. Once again Jay is there to run interference and confronts Ben for upsetting her.

Then Ben is stunned to hear that Lola recently had an abortion. He won’t stop haranguing her until she admits that she recently slept with Peter. This makes Ben livid and he verbally abuses her before leaving to get drunk at Prince Albert.

Later he looks for Peter but sees a van following Phil and Danny Hardcastle (Paul Usher) as they depart for the job.

Is it possible that angry and unstable Ben ruins the job and perhaps creates a dangerous situation?

These scenes are part of a special episode devoted to Ben’s hearing loss storyline. It will be told from his perspective and feature limited audio levels and broken sentences in order to reveal the difficulties deaf people face.

The Bold and the Beautiful Spoilers: Heather Tom Dishes On What Classic Episodes She Wants To See