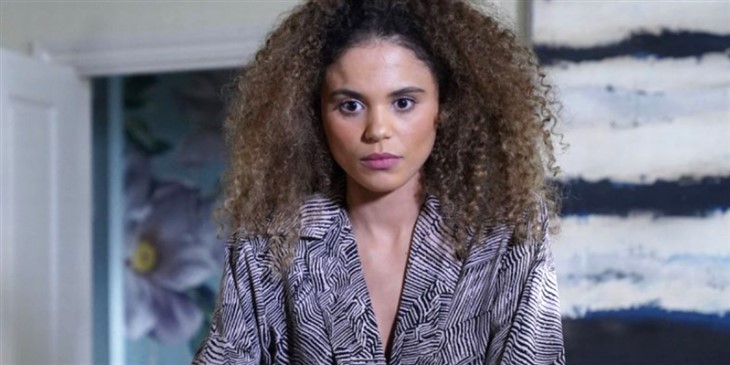 BBC Eastenders spoilers and updates reveal that Chantelle Atkins (Jessica Plummer) is living a nightmare. Abused by Gray Atkins (Toby-Alexander Smith), could the story end in her death? Fans notice the actress has deleted references to the soap on her social media accounts. She also made a statement that makes some wonder if Chantelle will meet a brutal end.

Viewers have seen that Gray is beginning to arouse suspicion. First, there was Dotty Cotton (Millie Zero) telling him that she noticed the tracker in their car. She asked if he was the jealous type. He used car theft statistics to explain the tracking system.

Shortly after that episode aired, Gray told Suki Panesar (Balvinda Sopal) that Chantelle would no longer be working for the Panesars. The matriarch doubted he was telling the real story and casually asked if he was the jealous type. Two different women on two different days using the same exact phrase. That isn’t a coincidence and it’s clear that Gray’s “good guy” facade is withering away.

Eastenders spoilers reveal that all storylines eventually come to an end. Some are quick resolutions while others go on for quite some time. We’re not sure when the abuse will be exposed or if Chantelle will leave. However, this story will come to its conclusion at some point.

In a Reddit thread, one fan suggested that Chantelle’s death could be coming up in the near future. The individual wrote that Plummer had removed all references to Eastenders from her social media accounts.

“I do feel like they’ll kill her off. I’ve said this for a while. The actress removing references to EE on her social media is what made me start thinking this is where the storyline is headed.”

On social media, Plummer posted a photo and in the caption, she mentioned it was back when she had a job. This was posted in March, so it very well could be referencing the COVID quarantine. However, some fans believe that it was a hint of her exit from the soap, Express reported.

Do you think the abuse storyline will end after Gray Atkins kills his wife? Do you believe that Jessica Plummer has been dropping clues about her exit? We will just have to wait and see what happens with Chantelle Atkins’ storyline.