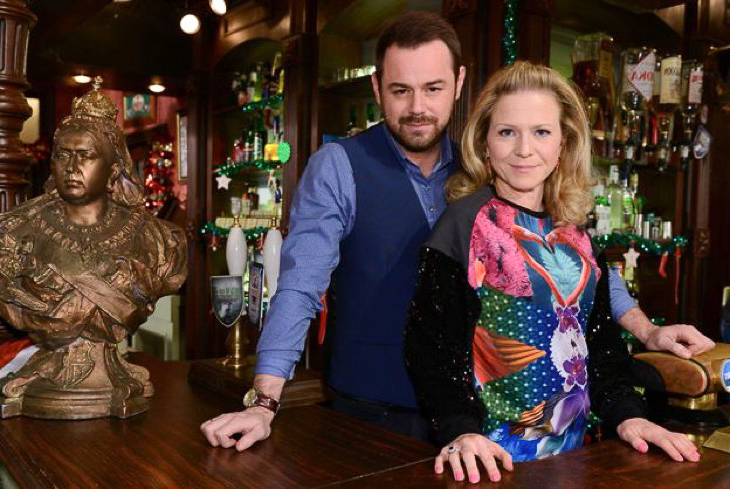 Eastenders spoilers reveal that when new episodes air, Mick Carter (Danny Dyer) and Linda Carter (Kellie Bright) will embark on their new journey. They have sold The Vic and will move into a flat. So, what’s next for the couple? The actors both shared hints of what is coming up. Plus, Bright confirmed the Carters will be “tested.” Here are four theories on what that means.

For months, we watched as Linda’s alcoholism put her in dangerous situations. It seemed that she would do something outrageous or shocking each week. There was a time period in which fans were convinced that Linda would lose her family before getting sober.

She eventually did enter recovery and has been trying to stay clean. However, she will always face temptations and cope with triggers. Is it possible that despite Mick giving up his dream to keep Linda sober, that she could end up relapsing anyway?

Eastenders spoilers previously teased that Linda would be determined to keep Phil Mitchell (Steve McFadden) from buying The Vic. Her change of heart was after discovering how terrible he treated Sharon Mitchell (Letitia Dean). Linda was pretty disgusted with Phil demanding that Sharon pick him over her own baby.

In the end, The Vic was bought out from underneath Phil. Ian Beale (Adam Woodyatt) ended up purchasing it for Sharon. Now, it’s a given that Phil will want to get revenge on Ian and perhaps even Sharon. However, Mick and Linda could also get mixed up in the mess for their betrayal.

Another storyline that involves Sharon is the truth about Dennis Mitchell’s (Bleu Landau) death. She has no idea that her number one supporter is the same person responsible for the boy’s death. Dotty Cotton (Millie Zero) knows the truth.

But if she tells Sharon that Ian caused Dennis’ death, will her story be believed? Maybe Ian is right — she might trust her “loyal friend” more than a girl that was just busted for drugs. The Carters could somehow get involved in this story, especially since Linda is close to Sharon.

Will The Carters Divorce?

There is speculation that the couple could be headed for divorce, per The Sun. Some believe that Linda will end up having an affair with Phil. Others think that Mick will be the one to stray. Perhaps they both will end up in other people’s beds.

Even if the couple remains loyal, there are other reasons a divorce could be in the future. They have been through so much that it could put a strain on any marriage. They think that a fresh slate will fix all their problems. But what if it doesn’t? What if it makes them realize that what they had is now gone?

What do you think Kellie Bright meant by Mick and Linda being “tested?” What about Danny Dyer saying that his new story is the best one he’s ever had on the soap? What could be in their future? We will just have to wait and see what develops.