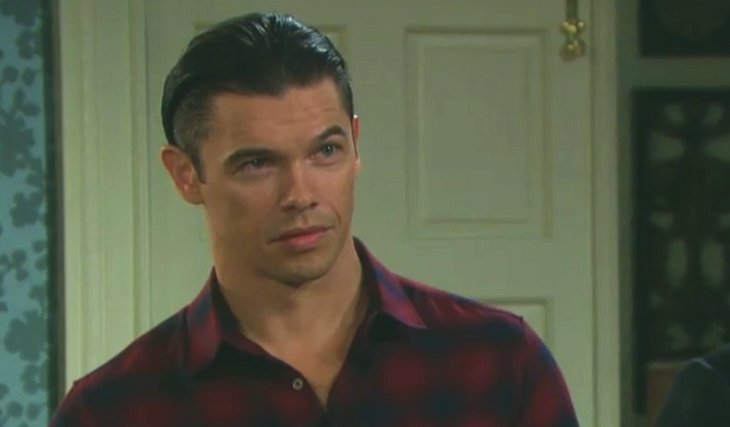 Days of Our Lives spoilers tease that there will be reconciliations, returns and that Days of Our Lives will be your daytime place for endless love, badass men, badder-ass women, forever family, heartstring tugs, a lotta chisel, and always so many surprises!

Xander Kiriakis And Sarah Horton Have A Sweet Private Wedding

First on the preview, Xander Kiriakis (Paul Telfer) and Sarah Horton (Linsey Godfrey) marry in a small, intimate ceremony in the living room of the Kiriakis mansion; Sarah is dressed in a simple white wedding dress carrying a bouquet and Xander appears to have a flower from it stuck in the buttonhole of his suit jacket. Sarah looks surprised!

Meanwhile, Jennifer Deveraux (Melissa Reeves) advice to Kayla Brady (Mary Beth Evans) is to “Let your heart choose the man that you want to spend your life with” as Kayla is torn between Steve Johnson (Stephen Nichols), now that he has been freed from the “essence” of Stefano DiMera (Stephen Nichols) and Justin Kiriakis, (Wally Kurth) who she had been seeing for about the last year and had planned to marry. It looks like she chooses Steve, since later on in the video it shows her kissing him in a hospital bed – complete with patch! Steve is definitely back as himself, patch and all! However, Kayla also has to give Steve terrible news in the hospital when she tells him that his sister Adrienne Kiriakis (Judi Evans) died. Steve cries and visits her grave and places a rose on it.

Days of Our Lives Spoilers: Eric Drops Bombshell On Brady And Kristen – Who Should Get Baby Mickey? https://t.co/6TK4MSmQ4A pic.twitter.com/WwqCcT9rsU

Ben Weston Proposes To Ciara Brady And She Says Yes!

Next, Ben Weston (Robert Scott Wilson) and Ciara Brady (Victoria Konefal) are in bed, when Ben pops the question, and asks again, “Yes?” to which a happy and excited Ciara responds, “YES!” They too will be making plans and choosing dates for a wedding in the near future! Later, Ben loses it when he and Ciara encounter Christian Maddox aka Evan Frears (Brock Kelly) and tries to strangle him!

Chad DiMera (Billy Flynn) , is back to being himself after being under his father’s spell due to brainwashing . He wants to prove it to his wife Abigail DiMera (Kate Mansi) as he pushes her down into bed and reassures her that she is the love of his life! Meanwhile, Abigail’s parents, Jack Deveraux (Matthew Ashford) and Jennifer Deveraux get back to some love business as they kiss passionately!

Marlena Evans And John Black Are Back On Track

Meanwhile, at John Black (Drake Hogestyn) and Marlena Evans’ (Deidre Hall) condo, they are back on track and cuddle on their couch, and Marlena is grateful that John was able to rescue her from a life of being Stefano’s brainwashed bride! In a riveting scene, John tears Stefano off of Marlena as they are on a bed at Maison Blanche, and tells him to get his paws off her! Stefano then runs downstairs, where a furious Anna DiMera (Leann Hunley) spears him in the eye with a stiletto heel and saves Tony DiMera’s (Thaao Penghlis) life! Days Of Our Lives viewers will recall that both Steve and Marlena had chips in their brains controlling them and they undoubtedly have been removed and things should be getting back to normal for both couples.

Lani Price And Eli Grant Get Back To Love Business

Lani Price (Sal Stowers) and Eli Grant (Lamon Archey) get back to love business as well, as he brings her breakfast in bed and later show their love for one another in a different way as they destroy some feather pillows in their underwear in their bedroom!

Hope Brady (Kristian Alfonso) and Jennifer reconcile in Horton Town Square, after Hope is also back to being herself after nearly two years of being Princess Gina Von Amberg (Kristian Alfonso)! The two cousins slash best friends have a lot of catching up to do!

A sweet scene takes place with Nicole Walker (Arianne Zucker), Holly Jonas (Scarlett and Harlow Mallory) and Eric Brady (Greg Vaughan) having some family time, and Holly calls Eric “Daddy” for the first time! She hugs him tight and he looks at Nicole with thankfulness on his face.

After Gabi Hernandez DiMera (Camila Banus) visits the grave of her late husband Stefan O. DiMera (Brandon Barash), she is near her store in Horton Town Square, Gabi Chic, and turns around to see someone familiar – is that you, Stefan?