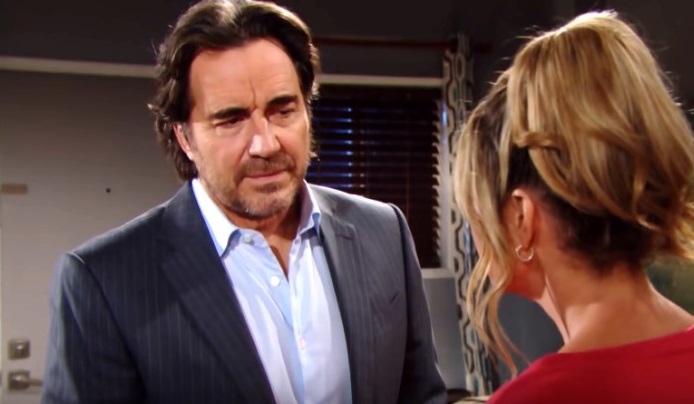 Ridge Forrester (Thorsten Kaye) said that he is done on ‘The Bold and the Beautiful’. Standing in front of loved ones and Bill Spencer (Don Diamont), Kaye’s character responded to Brooke Logan Forrester’s (Katherine Kelly Lang) epic misjudgment that went viral within the confines of her great estate.

He’s finished with the love of his life. Their just-realized reconciliation is over. Yes, ‘Bridge’ has officially, unequivocally collapsed.

Brooke realizes that she can’t talk away from her kissing Bill, as is visible through a smartphone video. Those moving images were unexpectedly captured by Shauna Fulton (Denise Richards), who is determined to move back to Las Vegas, Nevada. However, she’s not yet on board with Ridge’s renewed interest.

The Bold And The Beautiful Spoilers – Anti-Brooke Logan Character Rises

It was clear from the first time Shauna took notice to Ridge that this was a telegraphed pairing. However, B&B fans know that Brooke embraced Shauna as soon as Flo’s Logan paternity was confirmed. Logan’s family warmth soon cooled, as Flo’s role in the Beth Spencer (Madeline Valdez and River Davidson) scandal was confirmed.

Along the way, Richards’ character developed into the anti-Brooke. The contrast was one Ridge took notice of and was attracted to.

Ridge didn’t know that he’d be ending another edition of ‘Bridge’, but viewers did. With however long, it was going to take, and the climax came quickly, fans knew that Ridge’s awareness of Brooke and Bill passionately kissing in the cabin would surely upend any comeback plans either half of this on-again, off-again couple had.

All that Brooke said about Thomas Forrester (Matthew Atkinson) wasn’t enough to dissuade Ridge from believing that ‘Bridge’ could be repaired. But being seen on that video with Bill crossed the line by a California mile.

Shauna is right to reject Ridge’s idea that it’s now okay for them to be together. She doesn’t want to be his second choice or serve as a replacement for Brooke.

The Bold and the Beautiful Spoilers: Katherine Kelly Lang Opens Up About Brooke and Bill’s Fatal Kiss https://t.co/ycMMXjC6oI pic.twitter.com/k4JrHf1Z4J

Richard’s character learned in recent months that Ridge’s true love is his ‘Logan’. So, feelings of betrayal are fueling his desire to be with Shauna, rather than the realization that a new soulmate may exist.

Ridge will have to prove to Shauna that he loves her. That will take time and make for good soap.