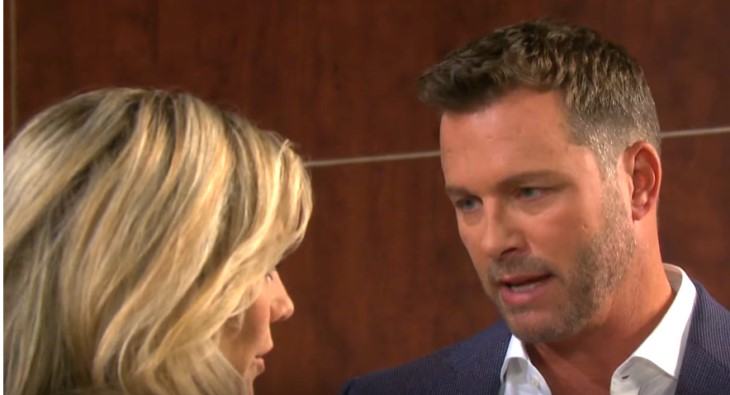 Days of Our Lives spoilers tease that Brady Black (Eric Martsolf) and Kristen DiMera (Stacy Haiduk) will go missing after escaping from Chad DiMera (Billy Flynn) in an upcoming episode of Days of Our Lives!

Days of Our Lives viewers will recall from Friday’s episode that Brady and Kristen are already at Stefano DiMera’s (Stephen Nichols) new “Maison Blanche” that he had built at Crystal Lake, just outside Salem. John Black (Drake Hogestyn) is also there, having come with Brady.

Kristen was already there after having witnessed Stefano’s marriage to Marlena Evans (Deidre Hall) after being forced to, along with Tony DiMera (Thaao Penghlis) after Chad held a gun on them and then performed the marriage ceremony. As Brady burst in with a gun, John was upstairs trying to stop the consummation of Stefano and Marlena’s “marriage”. Brady realizes that Chad is under some kind of spell or brainwashed just by the way he looks at him with a dead look in his eyes and talking with complete lunacy – either he’s brainwashed or he’s lost his mind entirely!

Chad points his gun at Kristen, and Brady and Chad get into a scuffle and Chad’s gun goes off, and Brady is hit in the arm, but it’s just a flesh wound. He and Kristen try to get through to Chad through his programming but are unsuccessful, and at the further risk of their lives, run and hide! Kristen doesn’t have her phone, and Brady may also lose his in the scuffle, so they just run, with no particular thought of a plan of where just somewhere they can try and hide from Chad and Stefano!

Brady and Kristen are now missing, Chad and Stefano realize after John manages to stop Stefano and pull him off Marlena; it is unsure where they will hide, but it will undoubtedly be somewhere that Kristen doesn’t think her father or Chad will think to look. They may have to hide out for quite a while, so it will have to be somewhere with food accessible.

It won’t be back in the DiMera mansion, not even in the tunnels because that would be way too obvious and it won’t be in the gatehouse on the DiMera property either. Chances are they will not go to Salem, but then they are on foot too; John and Brady likely drove in the same car, and Kristen and Tony came in the same car. Abigail DiMera (Kate Mansi) and Anna DiMera (Leann Hunley) are busy dealing with Chad and Stefano, while John is trying to help Marlena, so by the time all the chaos settles down, John, Anna, Abby and Tony will realize Brady and Kristen have gone missing!

Once Stefano is neutralized and Chad is tied up so that he cannot strike against them, John and Marlena will go on the hunt for Brady and Kristen!