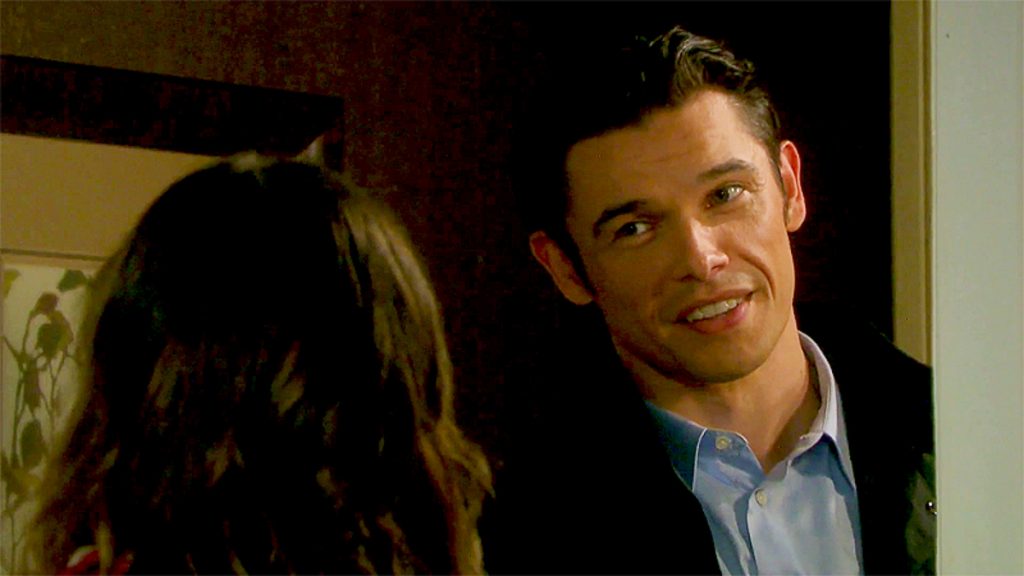 Days of Our Lives spoilers tease that Xander Kiriakis (Paul Telfer) will blame Ciara Brady (Victoria Konefal) for Victor Kiriakis’ (John Aniston) medical crisis in an upcoming episode of Days of Our Lives!

It sounds like in response to Victor and Xander suspecting Ciara had been playing them, that Ciara and her grandfather may get into an intense argument. She presses her grandfather to come clean about framing her boyfriend Ben Weston (Robert Scott Wilson) for the murder of his sister, Jordan Ridgeway (Chrishell Stause) and having had either Xander or another hit man of his kill Jordan.

Days of Our Lives viewers will recall that Ben had asked Victor to kill his sister to protect her from Ciara after Rafe Hernandez (Galen Gering) ate a poisoned cupcake meant for Ciara at David Ridgeway’s (Caleb and Kyler Ends) first birthday party, but then changed his mind and called off the hit. At the same time, Victor had wanted to protect Ciara from Ben because he had tried to kill him a few weeks before, not believing Ben was not still dangerous!

This is where Ciara and Ben have come up with their theory and Ben’s on his last appeal before execution! Victor is at the advanced age where too much stress could cause a stroke or a heart attack, and Ciara is like a dog with a bone when it comes to getting the truth out of him! However, Victor has previous medical history of a stroke, and Ciara’s confrontation of him takes a stunning turn.

Xander had warned Ciara to leave her grandfather alone and stay away from him but she didn’t listen to him, of course and now Victor has had a major heart attack – or stroke. Victor had a stroke that nearly killed him before, due to extreme stress – ironically, brought on by Ciara’s father, Bo Brady (at that time Peter Reckell) when Bo had found evidence that would possibly implicate Phillip Kiriakis (most recently John-Paul Lavoisier ) for the death of Paul Hollingsworth (Linden Ashby ).

Strokes and heart attacks are both rooted in high blood pressure, so it is possible that Victor’s medical crisis could be either a stroke or a heart attack. Victor is also older than when his first stroke happened, so of course his heart and his blood vessels are older too and more prone to dangerous medical conditions like heart attacks or strokes.

Days of Our Lives Spoilers – Will Victor Kiriakis Survive His Medical Crisis?

The question is now, how serious is Victor’s medical crisis and will he survive it? If it is a heart attack, he could need a transplant like Julie Williams (Susan Seaforth Hayes) did, but since Days of Our Lives just recently had Julie in that crisis, and Victor has had a stroke before, they will probably write it as a major stroke.

He will likely survive and be conscious at least at first, because other Days of Our Lives spoilers say that Justin Kiriakis (Wally Kurth) will urge Victor to come clean about Ben, and Xander will warn Ciara to stay away from her grandfather lest she upset him worse and cause more stress, possibly putting him into a coma. But will Ciara heed Xander’s warning or will Justin be able to convince Victor to come clean? Justin may be able to make a better case than Ciara trying to pressure the truth out of Victor!

Young And The Restless Spoilers: Theo Needles Summer About Her Obvious Attraction To Kyle