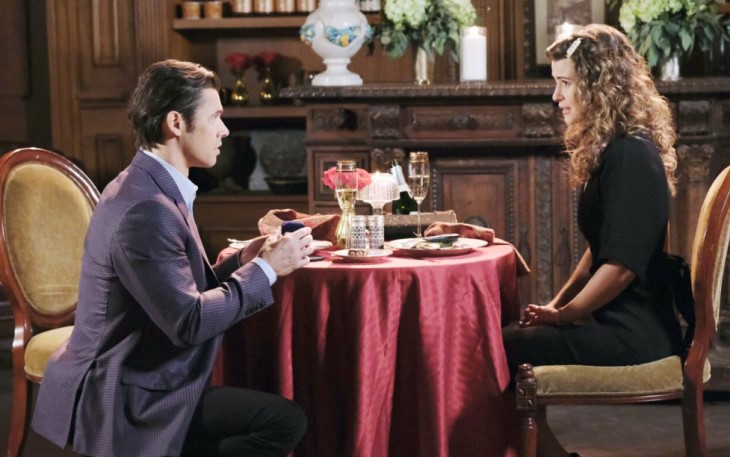 Days of Our Lives spoilers reveal Xander Cook Kiriakis (Paul Telfer) and Sarah Horton (Linsey Godfrey) set a wedding date. However, could their big day be interrupted by a shocking truth bomb? Meanwhile, Abigail DiMera (Kate Mansi) tries to save Chad DiMera (Billy Flynn) from Stefano DiMera’s (Stephen Nichols) spell. But it could put her in danger if the villain finds out about her meddling, though.

DOOL spoilers reveal Sarah has said yes to Xander’s marriage proposal, even though she laughed when he first got down on his knees. After realizing that he was serious and explaining his motivation, she agreed. However, not everyone is excited. Eric Brady (Greg Vaughan) is putting up a big stink about it, which is causing tension. Even so, “Xarah” will set a wedding date and continue with their planning for the big day.

It is teased that Xander and Sarah’s happiness might be short-lived, though. The baby swap secret is bound to come out soon. When it does, it could ruin the couple’s plans, or perhaps even their day if Nicole Walker (Arianne Zucker) wanted to make a bombshell announcement instead of telling people privately.

However it is exposed, Sarah is going to feel betrayed by Xander’s actions. It could affect their future together. Is this something that’s even forgivable? Or will he lose Sarah forever due to the baby swap secret coming out?

Days of Our Lives spoilers reveal Chad is still under Stefano’s spell. Brainwashed, he is trying to do everything that his father asked, including attempted murder. Abigail has returned home from South Africa and notices something different. Eventually, she will figure out what is really going on and do her best to free Chad.

However, when Abigail tries to overpower Stefano’s spell, she could make herself a target. The villain won’t react kindly to her meddling and interrupting his sinister plans. He has threatened to eliminate the young woman before, so it wouldn’t be too far-fetched for him to become furious.

Can they get the brain chip out of Stefano before he does something horrible to Abigail, as well as to Dr. Marlena Evans (Deidre Hall)? When will the “Steve-ano” storyline finally end? Fans will have to keep watching the NBC soap opera to find out.