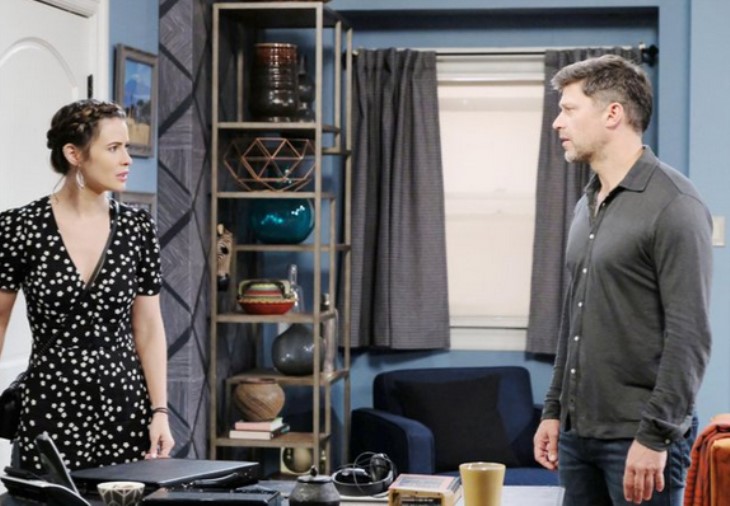 Days of Our Lives Spoilers tease that Eric Brady (Greg Vaughan) will express concern to Sarah Horton (Linsey Godfrey) about allowing her fiancé, Xander Kiriakis (Paul Telfer) to have a role in baby Mackenzie “Mickey” Horton’s (Josephine and Rosalind May) life in an upcoming episode of Days of Our Lives! 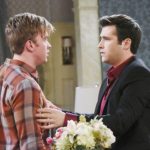 Days of Our Lives viewers will recall that the minute Eric found out that Xander was not Mickey’s father, and that he was (as far as he knows) he started interfering and telling Sarah that he could no longer let her boyfriend Xander have any access to Mickey, in spite of that Xander has been acting as her father all along, ever since she was born!

Now he is upset again that they are marrying and that Xander will be her actual stepfather – in spite of Xander having delivered Sarah’s original baby (which neither Sarah nor Eric have any idea is really Rachel Isabella Black yet) Eric feels Xander should have no rights with the baby and he will make a case to Sarah more than likely trying to talk her out of her marriage to Xander, which will do nothing except make Sarah madder and ready to come at Eric with both barrels!

There is no way that Sarah is going to let Eric tell her how to live her life and how to take care of her child and who she can allow into her child’s life, whether Eric is the birth father or not! It was different when Xander and she weren’t involved romantically and now engaged, she could see the concern and allowed it – but even then she let Xander fuss over and play with Mickey when Eric wasn’t privy because she was used to Xander as her father figure and attached to him – Sarah won’t want to exclude someone from Mickey’s life when she’s attached to him!

Eric will likely confront Sarah with Xander’s criminal history and track record and try to convince her against going through with her marriage to him first. Eric and Xander have never been on good terms, with Xander having truly done some horrible things since coming to Salem, although many of them were at the behest of Victor Kiriakis (John Aniston), which Eric may not even be aware of.

Days of Our Lives Spoilers: Sonny and Will Visit Adrienne’s Grave – Hope Has Nightmares About Princess Gina https://t.co/1zAuXXTbLF pic.twitter.com/lYEZE0PVgB

For instance, other than the baby swap that Victor pushed Xander into doing, he had been doing criminal operations in Cyprus and Cuba for Victor as well as laundering money for the Kiriakis family shortly before his arrival in Salem. Sarah will have none of it. As she told Nicole Walker (Arianne Zucker) in a recent episode of Days of Our Lives, she will tell Eric that Xander has changed, and all of the terrible things he did are in the past and forgiven and forgotten.

He has been nothing but good to her and Mickey and was there for her all through her pregnancy, even cleaning up after her when she had morning sickness – does that sound like an evil criminal? Besides, Mickey is attached to Xander – how can Eric demand that Xander stay away when Mickey loves him? Sarah will stand her ground and defend Xander to Eric and she will have none of this Xander cannot be Mickey’s stepfather stuff!

Young and the Restless Spoilers: Nick Knows Adam’s Up To No Good – See What He Does