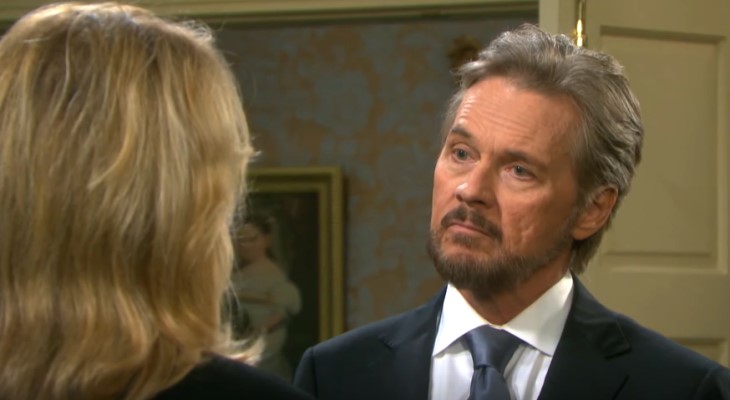 Days of Our Lives spoilers reveal Stefano DiMera (Stephen Nichols) will want to erase John Black (Drake Hogestyn) from Dr. Marlena Evans’ (Deidre Hall). After many failed attempts to do so, he will come up with a drastic demand that she kill John. Then, Anna DiMera (Leann Hunley) causes complete chaos at Stefano’s hideout and ends up attacking the brain-chipped villain.

DOOL spoilers reveal John continues to be a problem for Stefano. Marlena can’t get the man out of her mind, even though she is now his “Queen of the Night.” It is teased that Stefano sends John fake divorce papers to try and cut the bond between “Jarlena.” However, that won’t work because John will never give up on the woman he loves. Besides, there’s a clue that could lead to Stefano’s hideout.

When all else fails, Stefano will decide that the only option left is to get rid of John permanently. The brain-chipped villain will make a deadly demand. He orders Marlena to kill the man that she loves. However, will she be able to do it? After all, she refused to allow Stefano to have Kate Roberts (Lauren Koslow) killed even though Chad DiMera (Billy Flynn) has already been ordered to do so.

Days of Our Lives spoilers reveal Anna gets involved in the whole “Steve-ano” mess. At some point, she ends up at Stefano’s hideout. It most likely happens when Stefano orders Chad to arrange a family reunion so he can announce his wedding to Marlena.

Of course, Anna causes complete chaos at the hideout and ends up injuring Stefano.

Anna has a way of causing chaos whenever her emotions get the best of her. Fans all saw what happened with Anna and the gun during the hunt for Stefano in Prague. Something similar will probably happen this time too.

Even though it is teased that she injures Stefano, will it save the day? Could it prevent Marlena from having to go through the wedding to the villain? Could her injuring Stefano cause a brain chip malfunction and bring back the real Steve “Patch” Johnson (Stephen Nichols)? Or could she just make things worse for everyone involved? Fans will have to keep watching the NBC soap opera to see how this storyline turns out.