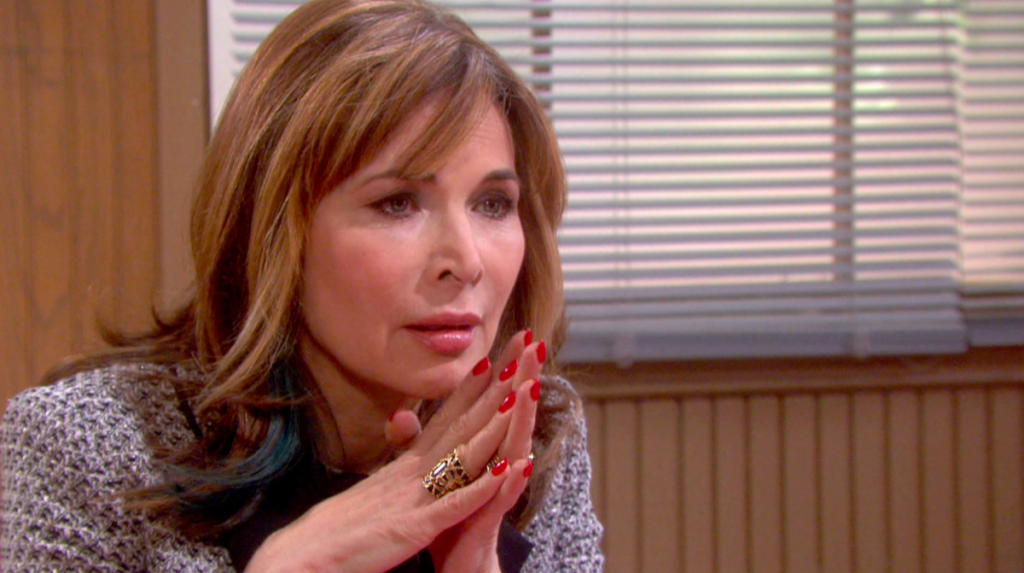 Tony is willing to help them find his father, and do anything he can, while Anna has a different opinion; offering various derogatory descriptions of Stefano, as Steve struggles to keep his composure!

The more time John spends with “Steveano” the more suspicious he will become of him, however! More and more un-Steve like behavior can be expected!

Once Kate Roberts (Lauren Koslow) learns that John has gone to Europe with “Steve”, hunting for Stefano, she realizes that Marlena Evans (Deidre Hall) is in extreme danger, knowing that Princess Gina Von Amberg aka “Hope Brady” (Kristian Alfonso) would kill Marlena if it means she can have John! Stefano is not there to keep her in line regarding Marlena, and Kate knows she may try to take advantage of Stefano’s absence to do exactly that! Kate decides to get more information and make it a point to check on Marlena before taking any further action, however.

If Marlena is okay she may make it a point in the form of a friendly remark to take care of herself and be careful! Kate knows how dangerous Gina can be and how deep her obsession for John is!

Days Of Our Lives Spoilers: Did Maggie Really Cause The Accident That Killed Adrienne? https://t.co/i1BHkHiW7E pic.twitter.com/ZGfnzonovq

Princess Gina nearly panics when she finds out Hope Brady’s son, Shawn Brady (Brandon Beemer) has arrived in Salem, after Detective Rafe Hernandez (Galen Gering) called him for help with his “mother’s” strange behavior! Shawn would remember when Hope was transformed into Princess Gina the last time and she is very afraid that he will figure out that the same thing has happened this time and she will lose her cover!

Long-time Days of Our Lives viewers will recall that the real Gina tried to kill Shawn, and how do Rafe and Shawn know that kill command hasn’t been programmed into the chip in Hope’s brain that Stefano put in many years ago to control her?

Lani Price (Sal Stowers) learns her ex-fiance, whom she still loves, Eli Grant (Lamon Archey) and her enemy, Gabi Hernandez DiMera (Camila Banus) are getting married! Days of Our Lives viewers will recall that JJ Deveraux (Casey Moss) had tried to help by disabling the app on Gabi’s phone that controls Julie Williams’ (Susan Seaforth Hayes) pacemaker, but was unable to get past the security on the phone to be able to do so.

She fears telling Eli the truth about why she really dumped him until she knows Julie is safe, and even if she did tell him the truth, how does she know he would even believe her? For the time being, at least, there isn’t anything that Lani feels she can safely do without endangering Julie!

The Bold and the Beautiful Spoilers: Is Thomas About To Change His Tune? Long Road to Redemption Ahead