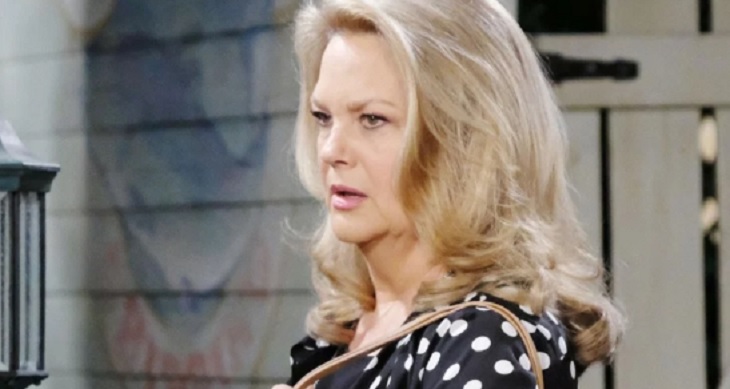 Days of Our Lives spoilers tease the reason Tony DiMera (Thaao Penghlis) doesn’t reach out to Anna. It is because he was threatened by his sister and “bride,” Kristen (Stacy Haiduk), who is impersonating Nicole Walker (Arianne Zucker). It turns out that Tony is doing whatever he can to protect Anna’s life and she doesn’t even realize it. Keep reading to find out what is known so far.

In the latest issue of Soap Opera Digest, an interview with Leann Hunley reveals a few clues. When Tony vanished before, Kristen was not happy. She needs him in order to get what she wants. He also knows too much and even though they are siblings, she knows he hates her plan.

Days of Our Lives spoilers confirm that the reason Tony doesn’t contact Anna is because of Kristen’s threat. He would never forgive himself if anything happened to Anna. Unfortunately, she is on her way to Salem to lay Tony’s ashes to rest. Remember, Tony isn’t supposed to be alive.

She gets angry when she sees Tony DiMera for two reasons. The first is due to him being alive and not reaching out to her. She views it as a rejection. The second reason is because he is married to Nicole Walker, which basically is polygamy.

Days of Our Lives spoilers don’t confirm if he tells her the truth about everything. However, chances are he will try to explain. But as fans know, when Anna gets upset, she can’t think straight and will react in extreme ways.

Days of Our Lives Spoilers – Roman Roped Into A Wedded Plan

What we do know is that Anna comes up with a scheme and it involves Roman Brady (Josh Taylor). There is an announcement of another marriage. That’s right, Roman is going to wed Anna, but it isn’t clear why he agrees to this. Fans will just have to keep watching the NBC soap opera to find out.

Bold and the Beautiful Spoilers: Steffy Forrester Left Heartbroken And Giving Up Phoebe