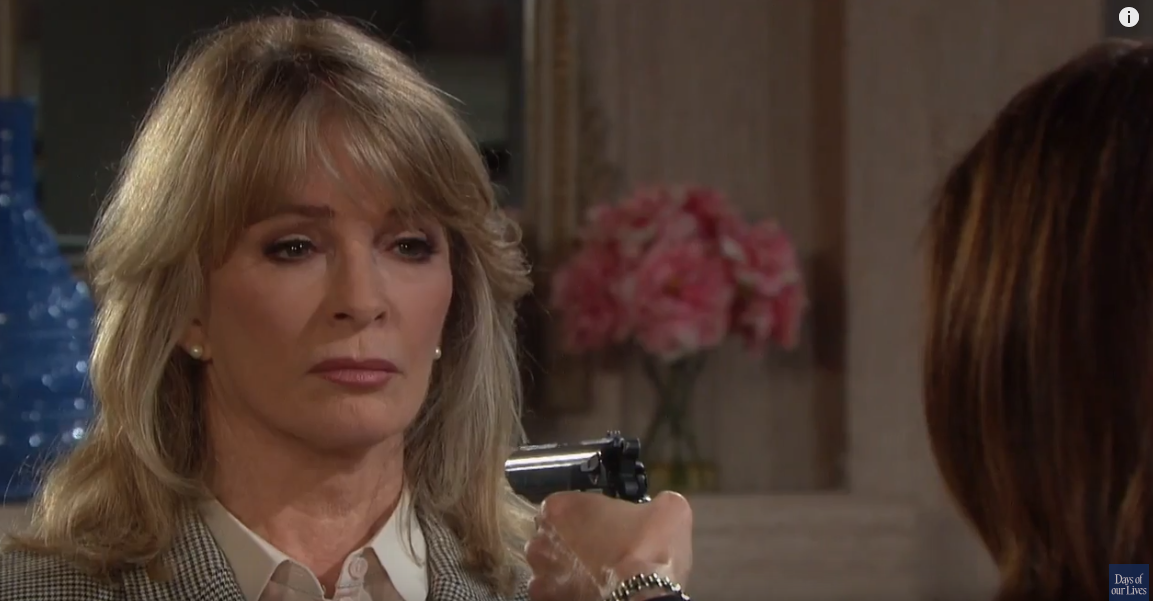 Days Of Our Lives Weekly Preview

In this week’s Days of Our Lives weekly preview, family takes on family, friends become enemies, and the partner is left hanging! The preview begins with Will Horton (Chandler Massey) who repeats what Ciara Brady (Victoria Konefal) just told him; “Victor (Kiriakis) did this to me.” A shot of Victor (John Aniston) sitting with his usual curmudgeon face at home on his couch is shown. Ciara tells Will, “He’s not going to get away with it”! Dr. Marlena Evans (Deidre Hall) is in danger, as Princess Gina Von Amberg aka “Hope Brady” (Kristian Alfonso) points a gun at her and tells her she needs to die! “Steve Johnson” aka Stefano DiMera (Stephen Nichols) leads John Black (Drake Hogestyn) into danger, as he locks him up in a dark warehouse room (an empty room in his and Gina’s lair in Salem) and hangs him by his wrists from the ceiling!

Monday, Will and Ciara debate over coming forward with the truth that Victor framed Will for the accident that killed Adrienne Kiriakis (Judi Evans) over a year ago to cover up for Maggie Kiriakis’ (Suzanne Rogers) driving drunk and passing out, while Brady Black (Eric Martsolf) and Kristen DiMera (Stacy Haiduk) bond over grieving for their dead baby. Also on Monday, Kristen stirs up trouble for Eric Brady (Greg Vaughan) and Nicole Walker (Arianne Zucker) and Sonny Kiriakis (Freddie Smith) and Evan Frears (Brock Kelly) become closer.

Tuesday, John Black and “Steve” run into familiar faces in Europe as they encounter Tony and Anna DiMera (Thaao Penghlis and Leann Hunley). Tony will want to help in the search for his father Stefano in any way he can while Anna spouts disparaging remarks about Stefano, while “Steve” desperately tries to keep his composure and his cover! Back in Salem, Princess Gina is rattled when Shawn Brady (Brandon Beemer) arrives in town – she knows that he can blow her cover quickly! Also on Tuesday, Kate Roberts (Lauren Koslow) realizes Marlena is in danger, and Lani Price (Sal Stowers) finds out that Eli Grant (Lamon Archey) and Gabi Hernandez DiMera (Camila Banus) are getting married!

Wednesday, “Steve” lashes out at Anna, after she tells him that Stefano is nothing but a weak, pathetic coward! He tells her to do them all a favor and shut up, while John, Anna and Tony look at him in shock! Back in Salem, Rafe Hernandez (Galen Gering) is stunned when after he tells Shawn all of Hope’s strange behavior that she’s been transformed into Princess Gina! Also on Wednesday, Kate confronts Gina about her and Stefano’s plans for John and Marlena, and Chad DiMera (Billy Flynn) grills Kristen about her meeting with Stefano.

Thursday, John will grow even more suspicious of “Steve” when he finds Stefano DiMera’s ring in “Steve’s” bag! Stefano covers by telling him he got it from Kate, and he thought it might come in handy if they needed to lure Stefano, since he knows how important it is to him! Meanwhile, Princess Gina tries to lure Marlena into a trap! Also on Thursday, Rafe and Shawn try desperately to track Gina down, and a guilt-ridden Kate makes a confession.

Friday, Eric will turn to someone else for comfort, believing that Nicole is involved with Brady! Meanwhile, Stefano is back in Salem where he has trapped John in one vacant room of his lair, while Gina has taken Marlena captive in another. Stefano goes as Steve, and enters the lair and unties Marlena, and tells her that Stefano killed John! Also on Friday, Brady is thrown by Xander Kiriakis’ (Paul Telfer) urgent request, and Chad and Abigail DiMera (Kate Mansi) make a startling discovery!

Days of Our Lives Renewal Update: NBC To Keep The Sand Flowing Through The Hourglass