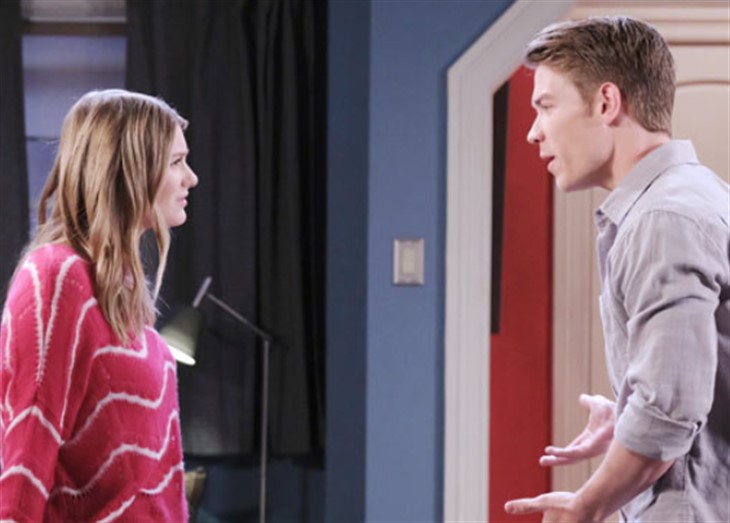 Days of Our Lives spoilers reveal that in Salem Allie Horton (Lindsay Arnold) is one pissed off mama. After the UK authorities refuse to press charges against, she steals a gun and goes to confront him. She points it right at his family jewels and threatens to blow off his man part! Tripp is scared because he knows Allie is serious. So, what happens next?

DOOL spoilers reveal that Allie goes from being frustrated to furious. She was already upset by the rape itself and having Henry Horton (Jayna and Kinsley Fox) be a constant reminder of that. Then, she was frustrated when DA Melinda Trask (Tina Huang) refused to press charges against Tripp because the crime happened out of her jurisdiction.

Now, she is told that even though the London police believe her, they are not going to prosecute. This is probably due to there, being a lack of evidence. They would likely not get a conviction, which would be a waste of time, money and resources.

Allie doesn’t own a gun, and we haven’t seen Nicole Walker Brady (Arianne Zucker) with one, at least not lately. However, Allie and everyone in Salem knows that Kate Roberts (Lauren Koslow) keeps a loaded gun in her purse. Since Allie is her granddaughter, it is likely that is where she gets the weapon. We don’t think that Kate would just hand a loaded weapon to Allie, though. We are thinking that she steals it from Kate’s purse.

Days of Our Lives spoilers confirm that Allie goes over to Tripp’s house and comes inside. She pulls out the gun and threatens to blow off his family jewels. Tripp knows that the young woman is serious. He also understands that something terrible happened to her, but he’s not the one who did it. However, Allie is in no mood to listen to Tripp’s excuses. She has every intention of pulling the trigger and Bobbit-izing Tripp.

However, Tripp will get to keep his precious manhood. Someone unexpected flies in to stop Allie from shooting Tripp down there. It is likely Ava because Soap Opera Digest confirms that both Tripp and Steve “Patch” Johnson (Stephen Nichols) find out the woman is still alive during the week of November 30… the exact same week that Tripp’s private parts are kept intact.