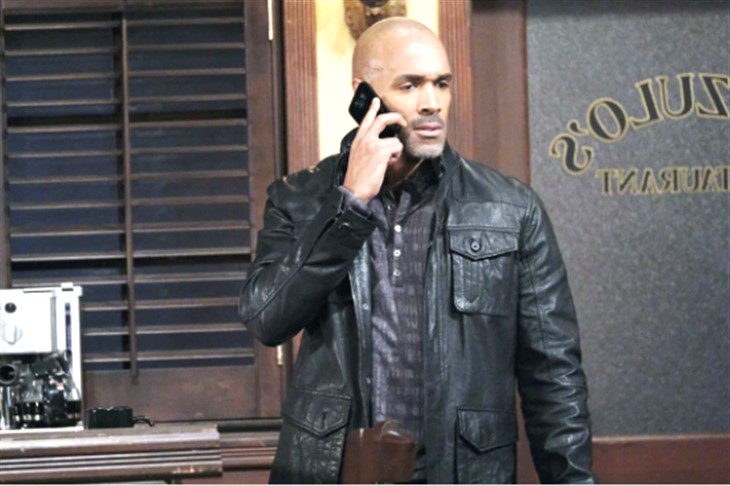 General Hospital (GH) spoilers tease that the worst kept secret in Port Charles, NY is about to come out in a public way, No, we aren’t talking the identity of Nina Reeves’ (Cynthia Watros) long-lost daughter or the truth about Peter Augusts (Wes Ramsey) and his criminal past. We are talking about Marcus Taggert (Real Andrews) and the fact that he isn’t dead. While Taggert has been extremely careless by showing up all over Port Charles, Julian Jerome (William DeVry) gave Cyrus the information in the hopes Julian wouldn’t make Julian place a bomb in the Floating Rib.

But Cyrus wasn’t having it and gave Julian a verbal lashing that has been a long time coming. Let’s take a look at why Taggert felt he needed to be thought dead so Cyrus would leave Trina Robinson (Sydney Mikayla) along. Cyrus kidnapped Trina and ordered Taggert to show up, so he could Taggert. But Cyrus had no intention of letting Trina live, so Taggert enlisted Curtis Ashford (Donnell Turner) and Jason Morgan (Steve Burton) to perform a rescue operation.

Taggert was all too aware that Cyrus would go after Trina again or perhaps his ex-wife Portia Robinson (Brooke Kerr) until Cyrus got his revenge on Taggert by killing him. Jordan Ashford (Brianna Nicole Henry) and Epiphany Johnson (Sonya Eddy) let everyone believe that Taggert is dead, including Curtis and Trina. The fact that Jordan has repeatedly lied to Curtis that there are no more secrets between them. Because Trina believed Taggert was killed during her rescue, she blames Curtis for Taggert dying. It may have been cruel but it kept Trina alive all this time.

Now that he knows, there is nothing to stop Cyrus from luring Taggert out by kidnapping Portia or Trina.
Taggert will have no choice but to reveal himself. While on one hard, Curtis will understand Jordan’s actions, he is his husband. If she can look him right in the eye and lie right to his face, Curtis will likely not think their marriage is worth saving. Trina and even Portia may reach out to Curtis, as they bond over all the lies they were told! And once Mayor Laura Collins (Genie Francis), Jordan will likely lose the Commissioner position, and her husband all at once, assuming Cyrus lets her live!

General Hospital  Spoilers – What Do You Think?

Should Curtis forgive yet another of Jordan’s lies? Or has all the drama caused by Taggert’s fake death made him realize that Jordan doesn’t really love him if she could lie so easily. Will Trina and Portia reach out to Curtis for support? Could Jordan lose her job, her husband and even her life when all is said and done? Is that what she deserves? Dangerous times are coming up in Port Charles, so stay tuned to General Hospital airing weekdays on ABC. And don’t forget to check back here regularly for all your General Hospital news, information and spoilers!