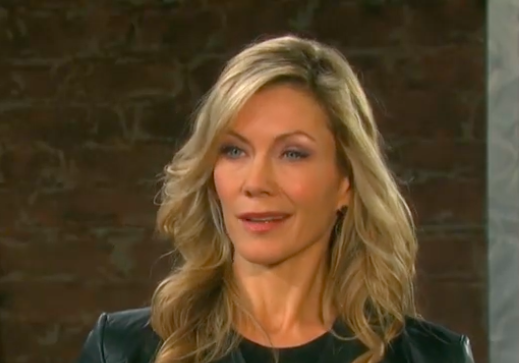 Kristen DiMera (Stacy Haiduk) is thrown when someone unexpected shows up on her doorstep! She will see who she will at first believe to be Steve “Patch” Johnson (Stephen Nichols) but very soon she will find that once again, The Phoenix has risen, only he has someone else’s body and appearance!

Days of Our Lives viewers can expect some questioning by Kristen to “Steveano” to make sure it’s really her father Stefano DiMera! Kristen didn’t even know if Stefano had been saved from the warehouse explosion or not, she had barely made it out herself and she was busy with Tony DiMera (Thaao Penghlis) and Vivian Alamain (most recently Robin Strasser) and making sure he made it out safe!

Brady Black (Eric Martsolf) decides to go along with Nicole Walker’s (Arianne Zucker) ruse to dissuade Kristen from getting her claws into him again, and he and Nicole play the part of a couple deeply involved and in love, and that is what he will tell Kristen when she tries! Nicole already told Kristen the same thing in Wednesday’s episode, and she didn’t take the news too well, as expected!

Nicole really put salt in Kristen’s wounds as well, and Days of Our Lives viewers could see that Nicole was trying to get her own little bit of sweet revenge for Kristen’s having held her and her daughter Holly Jonas (Scarlett and Harlow Mallory) captive for over a year, letting their loved ones think that they were dead!

Xander Kiriakis (Paul Telfer) warns Ciara Brady (Victoria Konefal) to stay away from her grandfather and his uncle Victor Kiriakis (John Aniston) who had a major stroke and has had to have brain surgery to remove a large clot in his brain. Xander has already blamed Ciara for Victor’s stroke, and is concerned that if she caused him that much stress, that he will suffer a worse fate, possibly a heart attack on top of a stroke!

Jack Deveraux (Matthew Ashford) rips into “Steve” and is perplexed by his brother’s behavior! They get into an argument about how “Steve” mistreated Kayla Brady (Mary Beth Evans) by ghosting her and then signing the divorce papers right away, and also how could he not show up at his own sister Adrienne Kiriakis’ (Judi Evans Luciano) wedding, not even sending a card! Steve shouts at Jack that Kayla has moved on, and Jack shouts back at “Steve” that she hurt her!