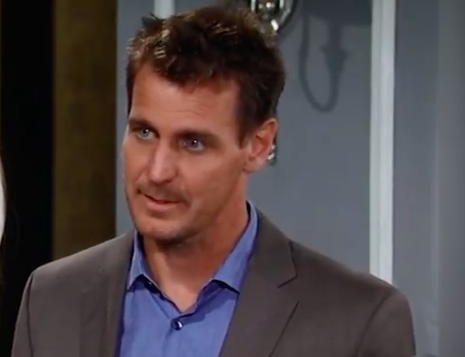 Jasper “Jax” Jacks (Ingo Rademacher) is having a discussion with Dr. Hamilton Finn (Michael Easton) who is getting very worried about Hayden Barnes (Rebecca Budig), his daughter Violet Barnes’ (Jophielle Love) mother, who has been missing for several months now. Jax doesn’t want to scare him so he doesn’t tell him that he had not been able to get in touch with her either; but he wants to find her also as he is worried.

General Hospital viewers will recall that he asked Nikolas Cassadine (Marcus Coloma) about her several weeks ago and Nikolas told her he had scared her into hiding, and she must have gone off the grid. Valentin Cassadine (James Patrick Stuart) had threatened her, Nikolas had overheard, but he overheard her seem to make a deal with Valentin for the codicil too; could he have made her disappear permanently?

Anna Devane (Finola Hughes) has questions for Peter August (Wes Ramsey). She startles him when she approaches him and tells him she has some questions for him. He doesn’t know that she has been investigating him behind the scenes because of Jason Morgan’s (Steve Burton) suspicions that he was connected to the attacks on Dr. Andre Maddox (Anthony Montgomery) and the presumed death of Drew Cain (Billy Miller).

She had also discovered that the gunman, David Black (uncredited actor) had worked at Euro Tech, a shell company of the DVX, at the same time as Peter did. The question is, will she ask him about if he knows the gunman or will she be asking him about something much less benign? He would become suspicious if she asks him about David Black, because then he would know she’s been investigating him behind his back!

At Charlie’s Pub, Ava Jerome (Maura West) tells Julian Jerome (William DeVry) about her sweet revenge! Blackmailing Nikolas Cassadine (Marcus Coloma) into marrying her is part of that revenge plot and General Hospital viewers found out that Nikolas doesn’t actually have the codicil yet, but somehow Martin Gray (Michael E. Knight) dug up a copy so Valentin would know what he was up against! It’s been authenticated but Ava still has the actual codicil!

Julian was with Laura Collins (Genie Francis) when Ava voluntarily committed herself to Shadybrook, after thinking she was hallucinating Nikolas as a ghost! Since Julian didn’t have an invitation to the wedding, will he think she’s hallucinating again, or did Nikolas return make the news?

At General Hospital, Michael Corinthos, (Chad Duell) bearing Wiley Cooper-Jones (Erik and Theodore Olson) interrupts Brad Cooper (Parry Shen) at work; Brad asks Michael if everything is ok, and he says, “Not really!” Has Lucas Jones (Ryan Carnes) taken a turn for the worse? Whatever it is, Michael has a very serious look on his face and a very serious tone in his voice!

Jason Morgan (Steve Burton) and Sam McCall (Kelly Monaco) are taking quite a chance with her parole when they showed up together to talk to District Attorney Robert Scorpio (Tristan Rogers) at the Port Charles Police Station!

They have both headed over there with the same idea in mind; seeing if they can get Robert to intervene in getting the restriction off Sam’s parole agreement that she cannot have anything to do with felons, even if their felonies or criminal records are in the past. Jason may share his suspicions about Peter August with Robert as well.

Sonny Corinthos (Maurice Benard) is optimistic that the study in New York about magnetic waves being applied to Alzheimers’ patients brains might be the first step towards a cure for his father, Mike Corbin (Max Gail). Carly Corinthos (Laura Wright) looks a little skeptical, but at least it’s not a trip to Sweden. She won’t want Sonny to get his hopes up too much, however and will probably tell him that!