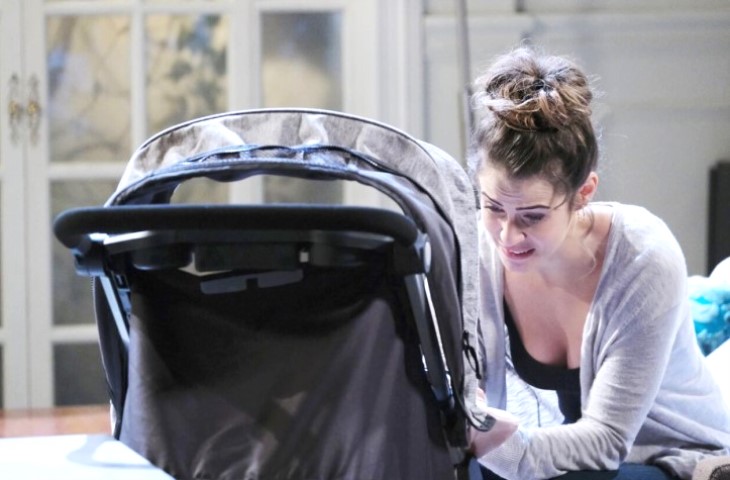 Days of Our Lives spoilers tease that Sarah Horton, (Linsey Godfrey) having fled Salem with baby Rachel Isabella Black (Josephine and Rosalind May) hides out in Paris, France with the baby in an upcoming episode of Days of Our Lives.

Days of Our Lives Spoilers – Could This Be Chad And Abby DiMera’s Old Apartment?

There is a good chance that this could be Chad (Billy Flynn) and Abby (Kate Mansi) DiMera’s old apartment in Paris – since Chad and Abby find themselves on opposite sides of the Sarah and Kristen DiMera (Stacy Haiduk) situation, which as Days of Our Lives viewers will recall is about Kristen and Sarah have had a baby girl on the same Mother’s Day night, and Sarah is involved in a wreck caused by her mother Maggie Kiriakis (Suzanne Rogers) driving drunk, in which Adrienne Kiriakis (Judi Evans) died, and Sarah gave birth by the side of the road assisted by Xander Kiriakis (Paul Telfer) who got her and baby Mackenzie Horton (Josephine and Rosalind May) to the hospital.

There had been some pressure on the baby by the seatbelt, which Xander had to get Sarah out of, and she had a seizure and died in the hospital nursery. She hadn’t cried very loudly either, concerning Sarah that her lungs could have been injured in the wreck. Then Victor Kiriakis, (John Aniston) upon hearing that Sarah’s baby had died, pushed Xander into switching her with Kristen and Brady Black’s (Eric Martsolf) baby girl.

The rest is history, with Kristen having gone literally mad with grief, which led to a chain of unfortunate circumstances in which Haley Chen (Thia Megia) died after being pushed down a staircase, and her bereaved fiancé, Abby’s brother JJ Deveraux (Casey Moss) went into a downward spiral, back on drugs, and culminating in his going after Kristen to avenge Haley’s death, and he would have shot her had Lani Price (Sal Stowers) who had fled to Rome where she and Kristen were both studying to be nuns in a convent not talked JJ down.

It’s quite likely that Abby is on Sarah’s side because of this and may even be helping her long-distance. If that is the case, then she and the baby are probably hiding out in Chad and Abby’s old apartment.

Xander has his suspicions that Sarah has fled to Paris with the baby, as before she dumped him at the altar of their wedding, he had told her that the Titan jet was loaded and ready to go to their Parisian honeymoon as soon as they had said their “I do’s”. So, that would be the most logical place to start to look for her. He will indeed likely find that the jet is gone, and confirms that the flight plan had not been changed.

He tries to call her but she doesn’t answer. He leaves messages, which is encouraging since at least his calls go to voicemail and it doesn’t say that the mailbox is full. That means to him that Sarah does have her phone and hasn’t gone missing off the face of the earth. Xander starts to wish, however, that he could track the phone like the police do so he could know where to start! Brady, Kristen, Eric Brady (Greg Vaughan) and Nicole Walker (Arianne Zucker) are all waiting for an update, so he continues trying to track her.

Days Of Our Lives Spoilers: Marlena In A Rage, Tears Into Orpheus https://t.co/jRdXr8GofB pic.twitter.com/5F3qA5wUFe

Meanwhile, Sarah is getting cozy with Rachel who she has decided to keep calling Mickey or Mackenzie, because she is old enough to know that is her name, and she wants to keep things as normal as she can, not only for the baby girl but for herself –even if it is a new normal in a new place. She cannot bear to give up the baby girl she grew to love!

The Bold and The Beautiful Spoilers: Sally Continues Her Ruse and Flo Tells Wyatt the Truth – Who Will He Believe?