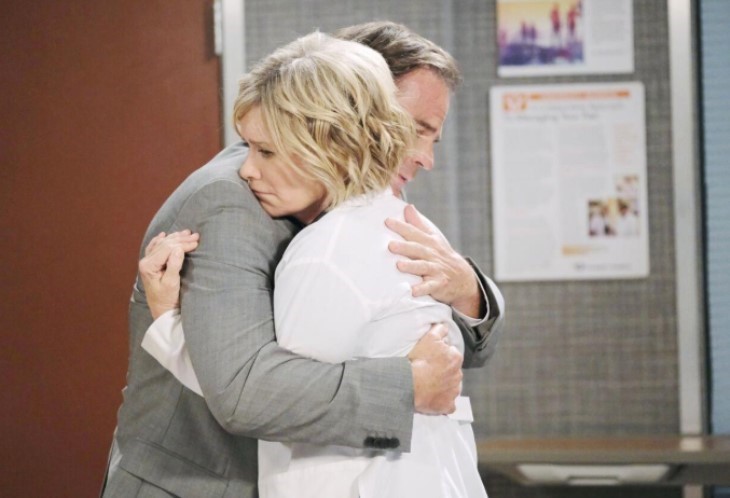 Days of Our Lives spoilers reveal that Steve Johnson (Stephen Nichols) tells Dr. Kayla Brady (Mary Beth Evans) to stay with her current partner. She doesn’t take the decision well because it’s not his decision to make. It’s her life, her heart, her choice. She cries to Justin Kiriakis (Wally Kurth) about Steve rejecting her. Slammed with the painful truth, how does he respond?

Days of Our Lives Spoilers: Kate Applies For A Job With Abe Out Of Desperation

Days of Our Lives Spoilers – Choosing Between Two Men

DOOL spoilers reveal that with the brain chip removed from Steve, he is back to himself. While he is eager to resume life with Kayla, she was forced to deliver some tough news. They are divorced and she is now with someone else.

Kayla loves Justin and doesn’t want to hurt him. However, she also has a long history with Steve. She is conflicted about which man she should choose. However, Steve ends up making the choice for her.

Steve tells Kayla that she needs to be with Justin, that he cherishes her and will keep her safe. It’s not the Steve is giving up on his true love. He knows that he was gone for a long time and she moved on. His return has caused Kayla’s stress and inner turmoil. Plus, Steve sees that Justin treats Kayla well, while Steve just ended up causing her pain.

Kayla isn’t happy about Steve making it “easy” for her. Speaking to Soap Opera Digest, Evans explained that it’s Kayla’s life, so it should be Kayla’s decision. However, Steve always thinks he knows what is best and acts accordingly.

Days of Our Lives spoilers reveal that Kayla is “super-pissed” but she is also hurt. She ends up running into Justin, who wants to know why she is in tears. The doctor tells him that Steve rejected her. Considering that the two men were both fighting for Kayla’s heart, this speaks volumes to Justin.

Even though Justin loves Kayla very much, he doesn’t want to be the second-choice or a back-up boyfriend. However, Evans explained that her character really does love Justin. So, they end up having a deep conversation, which leads Kayla to make her final decision.

So, who does she really want to be with? Does her heart say to reunite with Steve or to stay with Justin?