The Bold and The Beautiful Spoilers: Sally Continues Her Ruse and Flo Tells Wyatt the Truth – Who Will He Believe? 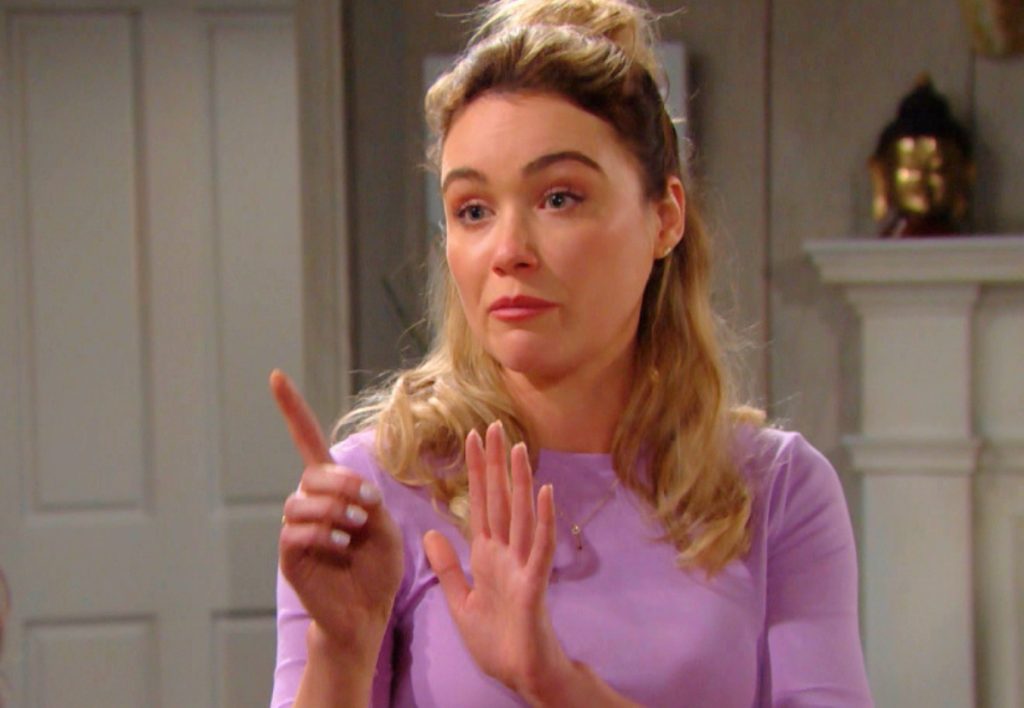 The Bold and the Beautiful spoilers suggest that Sally Spectra (Courtney Hope) might attempt to continue her medical hoax even though she’s confessed the truth to Flo Fulton (Katrina Bowden). That’s because it’s possible that without proof, any accusations Flo makes against Sally will simply become a case of “she said/she said.” B&B fans know that Sally is a fighter … and now she could come out swinging!

B&B fans know that not that long ago, Flo was able to get into Sally’s medical records. Inside the offices of Dr. Penny Escobar’s (Monica Ruiz), Flo managed to break into the lying doctor’s work computer. There, Flo discovered the truth about Sally’s entire deception.

Viewers then watched Flo go back to her boyfriend, Wyatt Spencer’s (Darin Brooks) house where Sally’s been living. Back at Wyatt’s house, Sally hobbled around defending herself from Flo’s verbal accusations. However, when Flo tossed a rubber snake into Sally’s path, the latter danced clear across the living room and all over the furniture in a panic.

Sally’s physical gaffe proved to Flo that everything she believed about Sally’s medical condition was true! However, it wasn’t until Flo began an unrelenting verbal barrage against Sally, eventually getting super personal and questioning Sally’s love for Wyatt that Sally actually made her biggest mistake.

In an emotional fit, Sally divulged the reasons behind her psychotic attempt to make everyone believe that she was dying.

While B&B viewers might note that Flo suggested things might go better for Sally if Sally just told Wyatt the truth herself, it’s not likely that’s going to happen. Some might agree that Sally has already invested far too much to back out of her crazy plan now. While Flo is definitely likely to tell Wyatt the truth, viewers might see Sally double down and move farther along in her “illness.”

When Flo tells Wyatt everything that’s been going on, he’s likely to be shocked. He might even disbelieve Flo. Why would Sally do something like that? Even if Flo tells Wyatt everything that Sally told her, Sally might be able to suggest that Flo’s making it all up because she’s jealous. Flo’s simply jealous of all the time that Wyatt’s been spending with Sally. That’s why Wyatt’s got to make Sally move out. Why can’t Wyatt see that?

However, Wyatt might begin (probably should have thought of this long ago) to believe Flo, however, when Sally continues to be unable to either name her disease or the exact symptoms she’s supposed to have, or what progression the disease will take.

The Bold and the Beautiful Spoilers: Flo Tricks Sally – Discovers Hoax And Exposes It https://t.co/vJTnnwaNFD pic.twitter.com/otmNsirmGD

Instead of coming clean to Wyatt, and in a desperate attempt to make him believe she’s been telling the truth, viewers might see Sally kill herself. Of course, she won’t actually kill herself. She’ll fake her death so that Wyatt and everyone else will be sorry they doubted her. Sally will carry through on one of the most selfish, narcissistic plans anyone in Wyatt’s life has ever conceived.

If that actually happens, it remains to be seen whether Sally will have thought through all the consequences of her actions. Where will Sally go once she’s “dead?” How does Sally plan to get Wyatt back from the grave? Does Sally plan to “haunt” Wyatt?

B&B viewers might agree that at this point Sally has taken things way too far. In fact, Sally’s probably taken things farther than even she intended. Most agree that it will be interesting to see if Sally is able to pull off a miracle that gets her out of the mess she’s created for herself.

Days of Our Lives Spoilers: Rafe Flees Salem with David – Orpheus a Danger to Evan’s Son