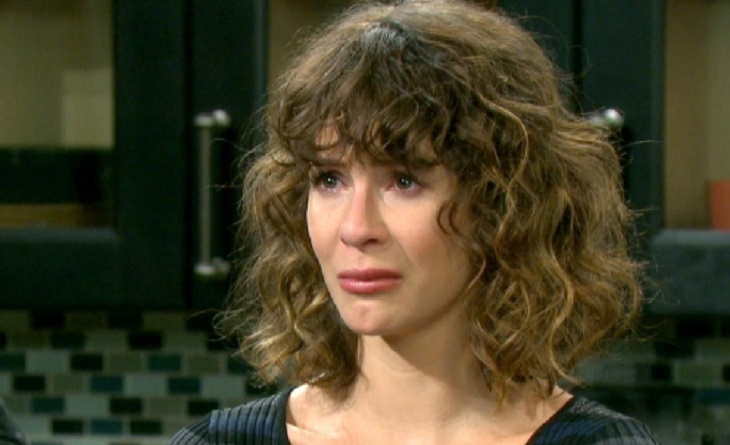 Days of Our Lives (DOOL) spoilers tease Summer Townsend (Marie Wilson) should be dead by now. That is, if everything that she told Maggie Horton (Suzanne Rogers) last Mother’s Day was the truth. It was a terrible night for everyone, and Summer’s actions began a domino effect that caused Adrienne Kiriakis (Judi Evans) to die in a car crash that may or may not have been caused by Maggie!

Maggie has three daughters. Melissa Anderson (last played by Lisa Trusel) currently lives in Nashville, but has made periodic visits back Salem over the years. Then there’s Sarah Horton (Linsey Godfrey), who lived with Melissa in Nashville for many years, before moving back to Salem a couple years ago. But Maggie also has a third daughter, Summer who she gave for adoption and didn’t meet until a couple of years ago.

Summer had many problems

Besides being a con artist and thief, Summer also developed a drinking problem. Since Maggie is also an alcoholic, she blames Maggie for her issues. When she came for an impromptu visit last Mother’s Day, she unloaded all her rage on poor Maggie. She told Maggie that she was dying from liver failure and only had six months to live. She also brought a bottle of alcohol into Maggie’s home and wanted them to share a drink.

Adrienne’s death is a result of this conversation!

Viewers never saw Maggie take that drink, and the next time we saw Maggie she was unconscious behind the wheel of a car. This was the car that caused the accident that Sarah and Adrienne were in. Adrienne’s wounds ended up being fatal, and Sarah lost the baby although she doesn’t know that yet because of the baby switch perpetuated by Xander Cook (Paul Tefler) and Victor Kiriakis (John Aniston).

Days of Our Lives Spoilers: The long con

But it’s important to remember that Summer is known con artist. She could very well have been lying to Maggie about dying in order to get sympathy or money. Or perhaps she just wanted revenge for Maggie giving her up all those years ago. It’s possible that Maggie never took a drink at all, but followed Summer, and it was actually Summer who drove the car. Once the accident occurred, it’s possible Summer took off but not before making it look like Maggie was the one behind the wheel. Moving her to driver’s side and pouring alcohol down Maggie’s throat seems very much like something Summer would do.

DOOL Spoilers: Sarah has expressed her anger at Summer

Sarah has expressed just how angry she is about what Summer did. That will only intensify once she finds out that her baby died. It would make sense if Sarah goes looking for Summer to confront her over her malicious actions. She’ll know that Summer may very well be dead by now, as it’s way past six months since she was last seen. But if she finds her sister very much alive, she may ever well be able to figure out that Summer was lying about everything. Could Sarah find the proof that Maggie isn’t responsible for what happened that night, but Summer is!

Is Summer still alive? Did she lie about dying and did she cause the car crash that fateful night? Will Sarah go looking for her sister? Only time will tell, so stay tuned to Days of Our Lives airing weekdays on NBC. And don’t forget to check back here regularly for all your Days of Our Lives news, information and spoilers!