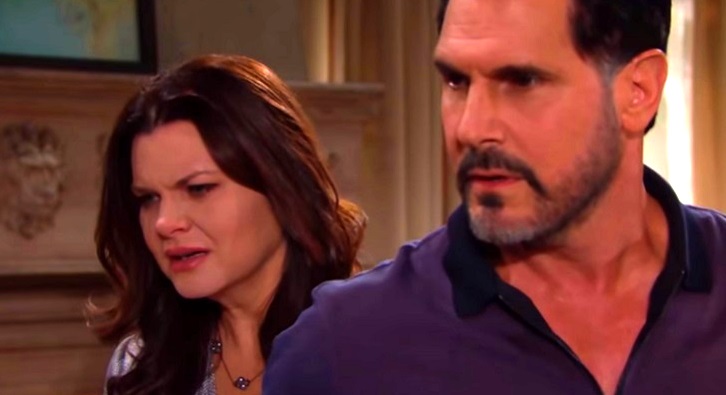 The Bold and the Beautiful spoilers tease that Katie Logan (Heather Tom) was crushed when seeing a grainy video of her soul mate and sister kissing. The shocker worked as Quinn Forrester (Rena Sofer) intended. The gathered crowd at Brooke Logan Forrester’s (Katherine Kelly Lang) home was forced to notice the sordid contents within a modern picture frame, with devastating effects.

Why in the daytime world did Bill feel compelled to kiss Brooke when they were in the cabin earlier this month? It’s at least arguable for Brooke to claim that her romantic detachment from Ridge, during their period of marital separation, produced vulnerability. But Bill has no such claim.

Batie was broken for a long period. Katie was unwilling to recommit to Bill, due to his history of erratic behavior and reputation for being with other women, including her sister.

The Bold and the Beautiful Spoilers: Don Diamont Shows How to Self-Quarantine – Listen to ‘Dollar’ Bill Spencer During COVID-19 Crisis! https://t.co/umgL1kuIGj pic.twitter.com/NiACFNGMd7

However, Bill truly stepped up. He proved to Katie and others that what he most wanted was to reclaim family life. Together, Bill, Katie and Will Spencer (Finnegan George) were creating a warm-hearted comeback storyline.

Now, Bill has nothing legitimate to say in response. Verbal explanations, that include the word sorry, are actually pitiful excuses.

Past bitterness about Brooke and Bill’s connection was honestly put aside, as Lang’s character and Katie were fully supportive of each other in recent months. Katie’s latest health scare, which caused her to need a kidney transplant, also served to reinforce this sibling bond.

The last image Katie needed to see was Brooke kissing Bill. Worse yet would be a video of them doing so in the cabin that’s adjacent to Brooke’s palatial estate. And, this humiliating incident was collectively witnessed by a group of loved ones no less.

It would have been bad enough to see Bill kissing anyone. But the idea that he did so with Katie’s sister is absolutely enraging.

The idea of a Brill reunion wasn’t in Brooke, or Bill’s mind. But their discussion in the cabin created the perfect soapy storm, where both characters impulse caved into old emotions.

Whether a latent connection proves to spark a reconciliation between Brooke and Bill is presumptuous. Katie and Ridge will need time to digest what they learned. As for Tom’s character, she’ll need more than words to move forward.