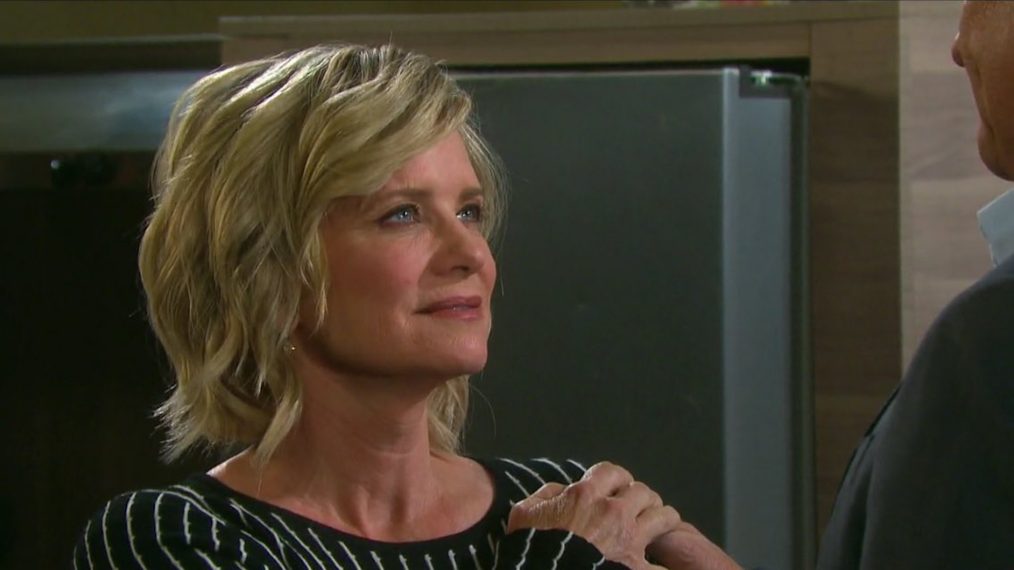 Days of Our Lives spoilers tease that Detective Rafe Hernandez (Galen Gering) and Justin Kiriakis (Wally Kurth) will team up to look for the missing Dr. Kayla Brady (Mary Beth Evans) in an upcoming episode of Days of Our Lives!

Days of Our Lives Spoilers: Kayla Brady Has Dropped Off The Radar

Kayla has dropped off the radar – she hasn’t been seen at Salem University Hospital since before the day Julie Williams (Susan Seaforth Hayes) was getting her pacemaker switched out and Justin tells Rafe she hasn’t returned home, or answered any phone calls and now he’s really getting worried because her phone has been shut off! She’s a doctor – and the hospital can’t get ahold of her by phone or pager.

Rafe wonders if she ran into Stefano DiMera (Stephen Nichols) and he convinced her, like everyone else, that he was really Steve Johnson (Stephen Nichols) and kidnapped her for some reason! Neither Justin or Rafe can think of any reason that Stefano would have an interest in Kayla, unless possibly that he needed medical attention and figures she would come with him thinking he is Steve! Rafe knows now that Stefano DiMera is masquerading as Steve Johnson, after Kate Roberts (Lauren Koslow) told him in Prague, and Justin is mystified by the whole thing, although he does recall when Kristen DiMera (Stacy Haiduk) masqueraded as Nicole Walker (Arianne Zucker) and wonders if it’s something like that, only somehow a whole body instead of just a face mask!

Days of Our Lives Spoilers: Sonny And Will Separately Recall Their Last Valentine’s Day Together https://t.co/63IJOIxoVH pic.twitter.com/3Zm6zGySim

DOOL Spoilers: Justin Kiriakis And Rafe Hernandez Aren’t Sure Where To Start Looking

Justin and Rafe honestly aren’t sure where to start looking – and with her phone shut off it can’t be traced to location. Rafe could, however as a police detective have the cell phone company track which cell tower she was near when the phone was last active, and that would at least provide a starting point. But he will have to get a warrant issued first and that could take a little time. Justin worries they don’t have the time, but Rafe says random searches won’t work – they need something more substantial. They could start with security camera footage from the hospital while Rafe waits for the warrant for the cell phone records to go through. Justin puts a good word in with the DA to rush the warrant and also files a missing persons report on Kayla and then he and Rafe go to the security office at the hospital, where indeed there is footage of a stumbling “Steve Johnson” holding his stomach and seeking out Kayla, who takes him to a room to treat him and then the two are never seen again! It’s like they disappeared in the exam room!

Apparently Salem University Hospital, even after the debacles with Dr. Wilhelm Rolf (William Utay) and a crazed doctor on staff having kidnapped Jennifer Deveraux (Melissa Reeves) a couple of years ago, they still haven’t beefed up their security! They get the cell phone records, Rafe triangulates from the last cell tower and they take off!