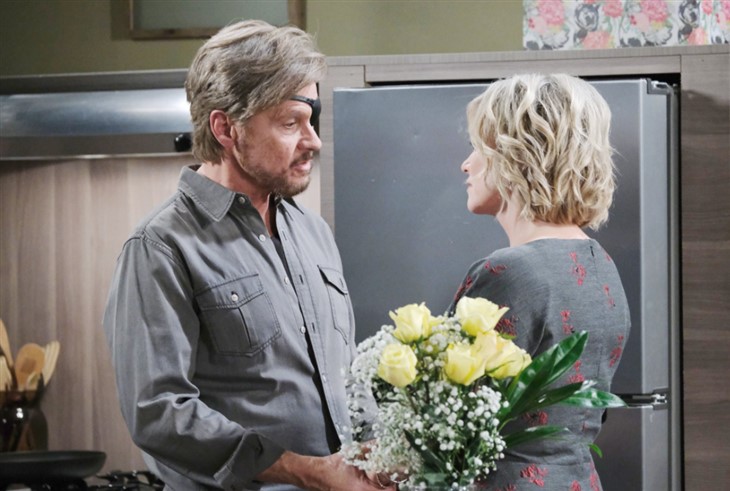 It is very understandable for Kayla to want to side with Allie. Longtime Days of Our Lives viewers will recall that Kayla, too, was raped. She was raped by her own brother-in-law, Jack Deveraux (Matthew Ashford) of all people! She and Steve talk about the allegations in her office at Salem University Hospital.

Steve thinks it has to be some kind of mistake; after all, they are talking about his son! This is likely after Allie has talked about what happened in London to Detective Lani Price Grant (Sal Stowers). With the support of Nicole Walker, (Arianne Zucker) who encouraged Allie to report the rape, she tells Lani everything. Everything she remembers, that is. Based on that interview, Tripp is arrested and taken down to the station for questioning. Tripp vehemently denies raping Allie; he denies even sleeping with her!

Justin Kiriakis (Wally Kurth) arrives to stop any further questioning. Steve retained him to defend Tripp. Justin gets him released, so at least he’s free for the moment. Tripp talks some more to Steve about what happened in London and reiterates he only gave her a ride home then left. They had danced and hung out a little at the club previously. But Kayla sides with Allie!

Back to Kayla’s office, Steve and Kayla talk over Tripp’s situation. Steve believes his son and thinks maybe Allie confused him with someone else. Kayla obviously doesn’t share his opinion. She says that maybe Tripp is just the kind of guy who won’t take no for an answer! So was Jack – it took Kayla years to overcome what he did to her! Of course, Steve remembers that incident, even though it was years ago. He will likely cite Allie’s being drunk and having only recently remembered the events.

He may say it doesn’t help that Nicole put ideas in her head about Tripp! Talking to her about not being able to consent to sex is one thing, but naming a rapist is quite another! Obviously, sex happened that night – and resulted in Henry Lucas Horton (Jayna and Kinsley Fox)! Steve wondered right away if Tripp could be Henry’s father, and asked him about it. Tripp claimed no knowledge of Allie’s pregnancy. He was shocked! Even though Kayla is not a psychiatrist, every doctor has some training in psychiatry. Traumatic memories are muddled.

Days Of Our Lives Comings And Goings: Lots Of Huge Returns, Seeing Double And One New Face #Days #DOOL #DaysOfOurLiveshttps://t.co/yCbyMx33nm

They are even more muddled and unsure when someone tries to force a person to remember them! The mind will fill in blanks as a natural process! Steve may point that out to Kayla. After all, Allie’s rape and Kayla’s rape were entirely different. Kayla wasn’t drunk when it happened and knew her assailant and who he was! Allie was blackout drunk and didn’t remember much for several months! The issue is so emotional for both Steve and Kayla, for different reasons, that Allie’s accusations could divide them!

’90 Day Fiance – The Other Way’ Spoilers: Three Ways That Jenny And Sumit Can Reach Their Goal