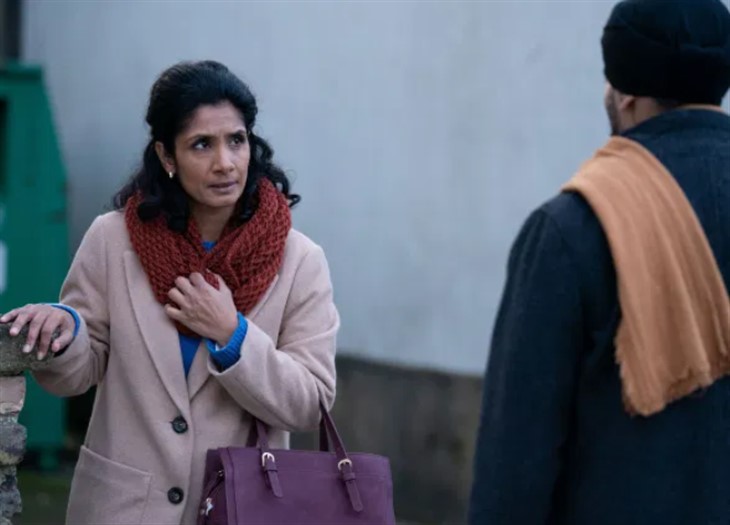 BBC Eastenders spoilers reveal that Suki Panesar has done some shocking and horrifying things since her arrival on the soap. Most recently, he turned in her own son to the police and even provided them with evidence. However, that’s just the tip of the iceberg. Actress Balvinder Sopal says that Suki is going to get much worse and more evil in upcoming scenes.

Ever since the Panesar matriarch arrived on the scene, we have seen that she is capable of pretty much anything. She pretended to have cancer and then used Jean Slater’s (Gillian Wright) inspirational statement and claimed it as her own. Even though Chantelle Atkins (Jessica Plummer) is dead, she demands that Kheerat Panesar (Jaz Deol) keep quiet about what he knows.

Eastenders spoilers reveal that her most recent act was helping cover up Jags Panesar’s (Amar Adatia) crime. Now she is turning him in and even-handed over evidence that will convict him. However, it turns out that this is just the beginning and we are going to see just how evil Suki can get.

Speaking to Metro, actress Balvinder Sopal explained that turning in her own son wasn’t really because of Habiba Ahmed (Rukku Nahar). She does disapprove of the relationship, but her main reason betraying Jags was to protect the family. In Suki’s mind, she had to sacrifice one child to protect the rest of them. Sopal also suggested that Suki could get even eviler.

“There is lots of exciting stuff and I can’t wait to see it on screen myself – I got goosebumps as I was filming some scenes! Can’t wait for everyone to see what’s in store.”

In addition to protecting the family unit by any means necessary, what else drives the soap villain? Why does she treat the Slater family like she does? Spoilers confirm that Suki’s raising the rent because there are more people living in the home. The actress explained,

“Suki thinks that anybody is beneath her! She sees her family as business people, wrongly or rightly they obtain money and there is a precedent to set. If we look at the way Suki dresses and the way she presents herself, she’s very in control, very considered, whereas I think she thinks the Slaters are just wayward and wild. In her eyes, they have no self-control or self-respect.”