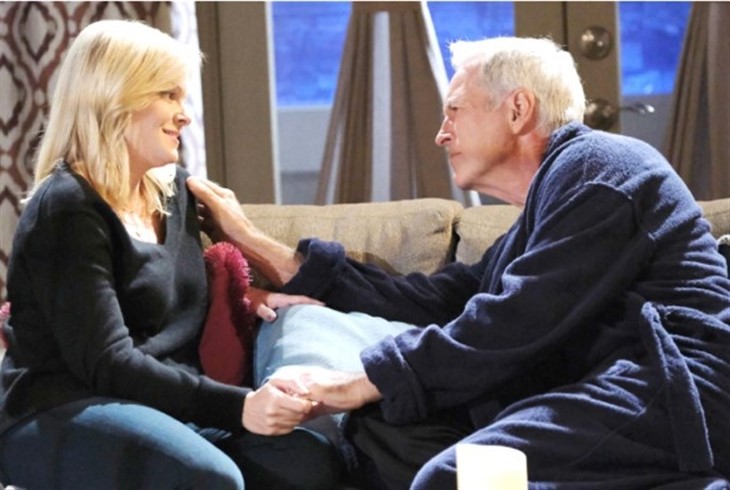 Days of Our Lives spoilers for the week of November 30 reveal that in Salem John Black (Drake Hogestyn) is going to be in legal hot water for his actions. Even though him choking Jan Spears (Heather Lindell) was understandable, Eli Grant (Lamon Archey) still arrests him. Now, Belle Black (Martha Madison) is faced with the daunting task of keeping her dad out of prison.

DOOL spoilers reveal that Jan thought it would be no problem to get rid of Belle and replace her at the wedding. She even put on Belle’s wedding dress and expected everyone to simply accept that she was going to be Shawn Brady’s (Brandon Beemer) wife. It was definitely a crazy scheme and it showed how truly delusional the woman is.

John lost control when Jan said that she already killed Belle. He lunged toward her and kept choking her until he was pulled away. Jan was not moving and remained unconscious.

Eli said that John wasn’t going anywhere and tried to place him under arrest. However, they still had to find Belle. They figured out that she might be at the Kiriakis mansion, and they were right. Jan somehow smuggled an unconscious Belle up to Philip Kiriakis’ (Jay Kenneth Johnson) bedroom. When Shawn busted through the door, he found Philip and Belle together. He assumed that the heir was working with Jan, but Belle stood up for him.

Now that Belle has been found safe, Eli will not forget about John’s actions. He took John to the police station while they wait for word on Jan’s condition. Based on spoilers for next week from Soap Opera Digest, John will be arrested and charged.

Days of Our Lives spoilers reveal that Belle will try to work on her dad’s case and prevent him from going to prison. Surely a judge will understand that there were extenuating circumstances. There is Jan’s history, her crazy scheme, kidnapping and drugging Belle as well as John’s lingering side effects from the aneurysm.

With DA Melinda Trask (Tina Huang) in charge, she’s not going to let John slide. She never takes into consideration anyone’s stories. She is tough and shows no mercy, not even to save a child. We saw this when she wouldn’t make a deal to save Nicole Walker Brady’s (Arianne Zucker) daughter’s life. So, she certainly won’t be making any deals with John.

A few months ago, head writer Ron Carlivati told SOD that John’s medical crisis would create some big consequences for “Jarlena.” Can Belle manage to prove their case and prevent him from going to prison?