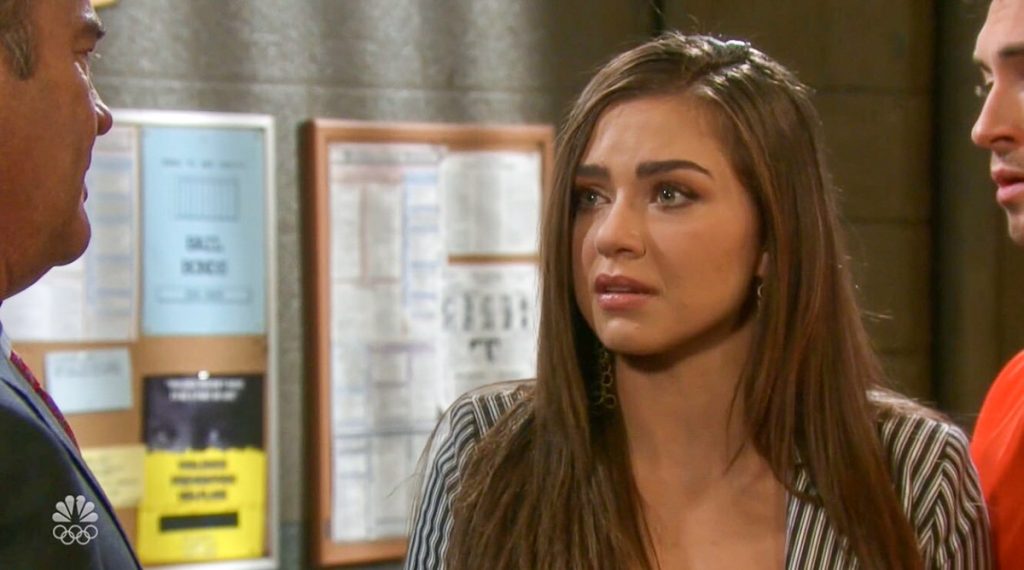 With the divorce from Will Horton (Chandler Massey) in the works, Sonny Kiriakis (Freddie Smith) still doesn’t want to move too fast, but he does allow himself to share a kiss with Evan Frears (Brock Kelly). Evan seems to be a nice guy and Sonny doubts that Rafe Hernandez (Galen Gering) would have hired him to be a live-in nanny to baby David Ridgeway (Caleb and Kyler Ends) without doing a background check.

After all, Rafe is a cop, albeit at the moment an unemployed one, and before that he was a FBI agent! It is curious, however, that Evan would pick Salem as a place to land after his toxic relationship broke up without having any ties to Salem. Sonny didn’t really want to give up on Will but apparently Will gave up on him so he really doesn’t have a choice.

Kayla Brady (Mary Beth Evans) presses “Steve Johnson” aka Stefano DiMera (Stephen Nichols) to tell her more about the woman he loves, after he tells her there is someone else. After being together for over thirty years, she feels like he’s rubbing salt in the wound, and he just simply doesn’t seem to even be the same person (which, as Days of Our Lives viewers, know, he’s not!)

She presses him for his paramour’s name and for more details, but he refuses to say. Everything seems to just be crashing down in Kayla’s heart where Steve is concerned, even though she has moved on with Justin Kiriakis (Wally Kurth). She wonders if it is possible for someone to love two people at the same time!

Ciara Brady’s (Victoria Konefal) confrontation with her grandfather, Victor Kiriakis (John Aniston) takes a stunning and very frightening turn, as the confrontation becomes more intense and Victor suddenly has a stroke right in front of her! Ciara goes immediately into savior mode for her grandfather and does what she can for him until the ambulance gets there, pushing her anger against him and Xander Kiriakis (Paul Telfer) aside for their suspected frame of her boyfriend, Ben Weston (Robert Scott Wilson). Victor will go into surgery as his family gathers at the hospital.

Meanwhile, at the prison, Xander pays Ben a visit and threatens him! Days of Our Lives viewers will recall from Friday’s episode that Xander and Victor had compared notes and came to the conclusion that Ciara had been playing them and trying to catch them saying something that would exonerate Ben. He is upset about Victor’s stroke, and if Ciara hadn’t been trying to help Ben this never would have happened! Xander tells Ben that they need to have a chat about his nosy girlfriend!