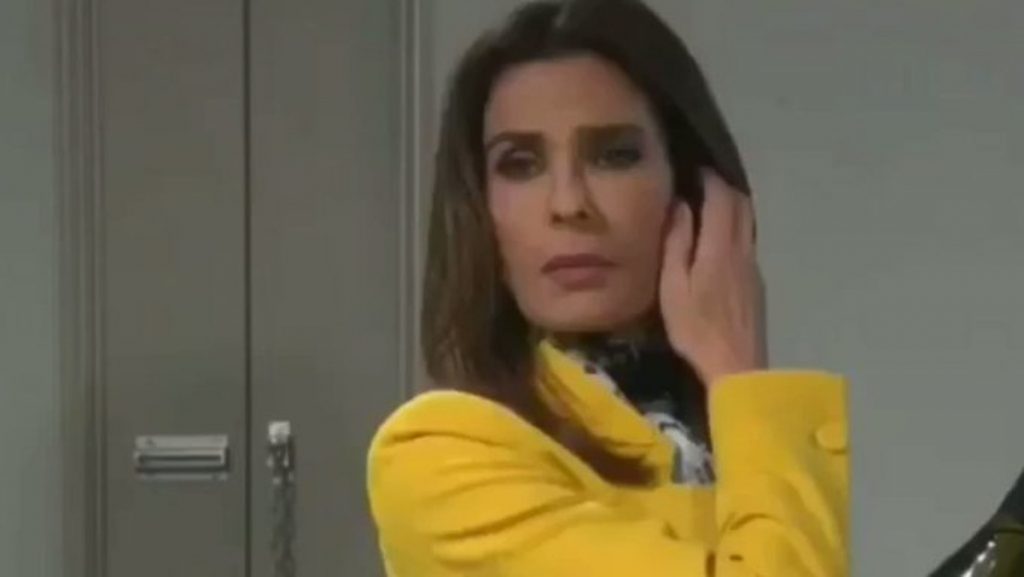 Days of Our Lives spoilers reveal Salem is finally realizing Hope Brady (Kristian Alfonso) isn’t acting like herself. Of course, this is because she is Princess Gina. Rafe Hernandez (Galen Gering) finds her in Stefano DiMera’s (Stephen Nichols) lair. How will she explain this?

Days of Our Lives Spoilers – Hope Brady Isn’t Herself… Literally

DOOL spoilers indicate that some Salemites are finally figuring out that there is something off about Hope. Dr. Rolf (William Utay) transformed her into Princess Gina one year ago. However, nobody has really clued into the personality changes or her suddenly speaking with a slight accent. Plus, there is the commissioner’s preoccupation with her appearance, not to mention her constant need for champagne and being caught smoking.

During a recent episode, Rafe and Abigail DiMera (Kate Mansi) finally discussed Hope’s strange behavior. It’s about time that someone noticed Hope was acting like a different person.

It is teased that after the “Hope” discussion, Rafe will be searching for Dr. Rolf, who is now a prime suspect in Jennifer Horton’s (Melissa Reeves) balcony fall. A tip comes into the station telling authorities to check Stefano DiMera’s (Stephen Nichols) old loft. However, once Rafe gets there, he is surprised to see Hope standing there holding a gun.

Days of Our Lives spoilers indicate that Hope was speaking with Stefano, but Rafe doesn’t see the villain. He manages to slip away, leaving Gina to come up with a logical reason why she is at the loft. After learning about the tip, she tells Rafe that it is the same reason she is there.

He accepts her story and looks around. However, Gina will have to get creative once again when the detective comes across her tiara.

It is revealed that Hope explains the tiara by suggesting it is for Dr. Marlena Evans (Deidre Hall). She says that Stefano has always had an obsession with the psychiatrist and considered her a queen. The jeweled headpiece must be for “Doc.”

Not only does this seem like a reasonable explanation to Rafe, but it redirects his focus to Marlena. The information could also help Gina in another way, by making it seem like Marlena could be in danger. This could set up a chain of events that will ultimately get Gina more access to the man she desires, Marlena’s husband John Black (Drake Hogestyn).

Be sure to tune in to catch up on everything happening with DOOL right now. Come back here often for Days of Our Lives spoilers news, updates and rumors!

Days of Our Lives Spoilers Monday, December 23: Kayla And Justin Romantic Christmas – JJ Comes Clean About His Addiction – Stefano Tempted To Reveal Himself To Marlena

The Bold and the Beautiful Spoilers: Bill and Katie’s Romance Going Too Well? Soapy Signs That Major Drama is Lurking Around the Corner