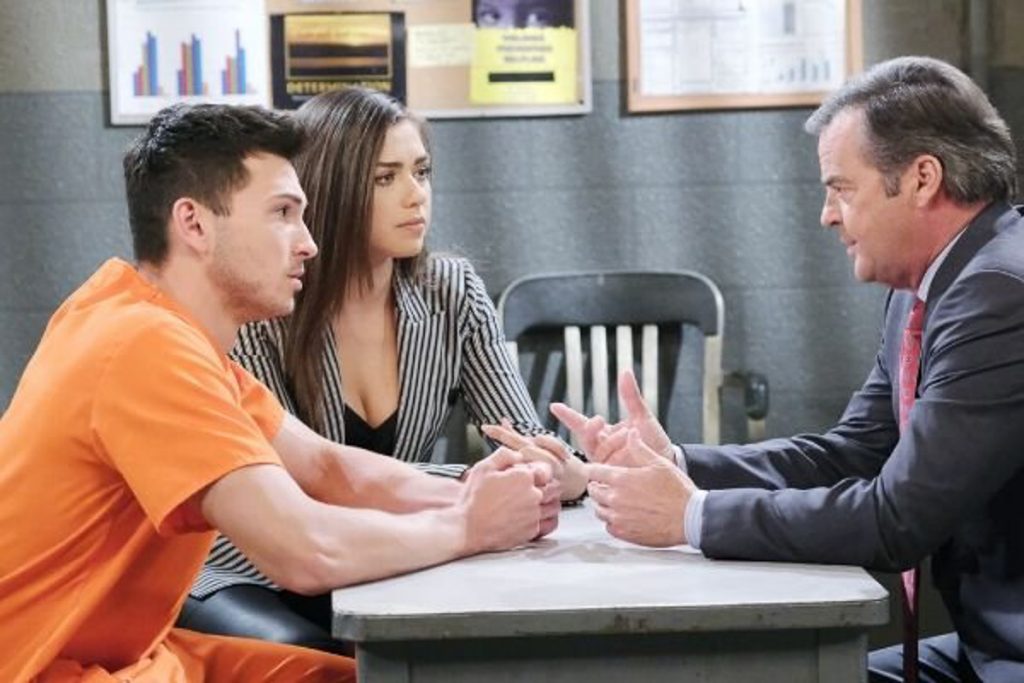 Time’s running out for Ben Weston (Robert Scott Wilson) as it is the day of his final appeal, and as always, his soulmate Ciara Brady (Victoria Konefal) will be there to support him. Justin Kiriakis (Wally Kurth) will also be there as his attorney, but so far they don’t have any real evidence to prove his innocence. Ciara and Ben strongly believe he was framed by Victor Kiriakis (John Aniston), Ciara’s grandfather but she hasn’t been able to get either a confession or find anything on paper that could be construed as evidence of Ben’s innocence.

Days of Our Lives viewers will recall that the reason that Ciara and Ben formed the theory that Victor had someone, probably Xander, kill Jordan Ridgeway (Chrishell Stause) and frame Ben for it was because shortly before Ben found his sister dead, strangled with her own scarf (which he had touched with un-gloved hands and left his DNA on it) Ben, being afraid for Ciara, had asked Victor to put a hit out on her and then called it off. Previous to that, Xander had knocked Ben out and brought him to the Kiriakis mansion and tied him in a chair, and Victor himself tried to strangle him!

Ciara might find herself in a bit of trouble with Xander Kiriakis (Paul Telfer) and her grandfather Victor; after the two compare notes and talk about the times that Ciara has been caught in Xander’s office when she did not need to be, the lockbox that she drilled into, Xander’s lockbox having been replaced with a new one he couldn’t open, and all the times Ciara has visited the prison, they realize that she has been playing them! This should lead to some serious talks between Xander, Victor and Ciara!

Kayla Brady (Mary Beth Evans) confronts Steve Johnson (Stephen Nichols) one-on-one! John Black, (Drake Hogestyn) and Marlena Evans (Deidre Hall) invite him into their home and Kayla follows him, and then lets loose with both barrels about how he treated her badly by stopping communication and then when she is driven to the point of desperation, and sends divorce papers to get his attention, then he signs them! She asks whatever happened to their love, whatever happened to the man he used to be? He just rather coldly replies that he didn’t come back on account of her!

Days of Our Lives #DOOL Spoilers: Gabi's Right About Vandals Sending a Message, But Wrong About Why @celebratesoaps https://t.co/QBKEqPhWIF

Princess Gina Von Amberg,(Kristian Alfonso) in her persona as Police Commissioner Hope Brady (Kristian Alfonso) lashes out at Detective Rafe Hernandez (Galen Gering) after the fingerprints come back from his dusting the tiara found in what he thinks is Dr. Wihlelm Rolf’s (William Utay) lair, and they turn out to be Rolf’s and – HOPE’S!

Days of Our Lives Spoilers: Shawn Is Back As Rafe Calls In Reinforcements – Is This The End For Princess Gina?