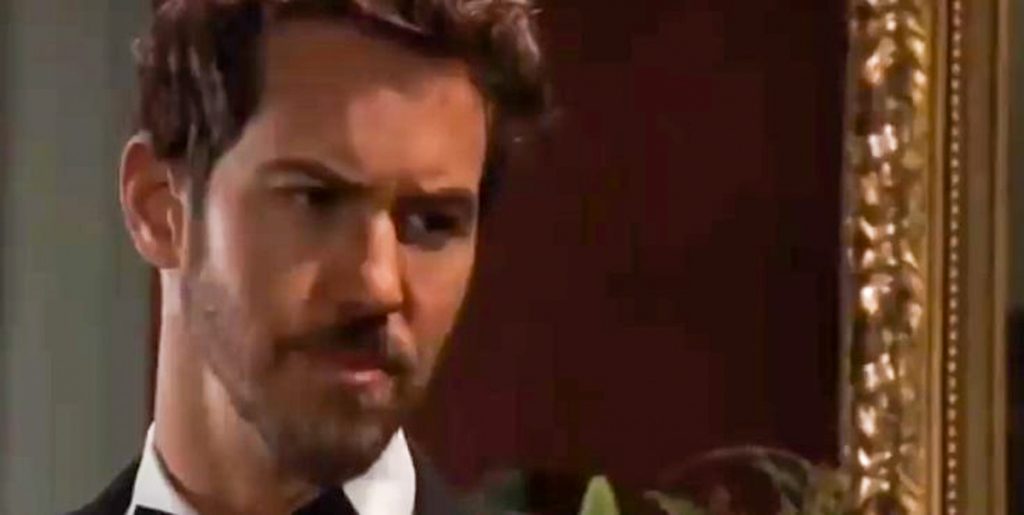 General Hospital spoilers for Monday, January 6 tease another exciting day of drama, confrontations, and suspense for General Hospital fans as some big revelations come to light!

During the wedding that won’t be again at Wyndemere Castle, Maxie Jones (Kirsten Storms) asks Peter August (Wes Ramsey) where Nikolas Cassadine (Marcus Coloma) has been all this time! Does Peter know something, or is she merely assuming he hid Nikolas out for the past three and a half years like he did Jason Morgan (Steve Burton) for five years in the Boronsky Clinic in Russia? Maxie surely seems to think Peter knows something about Nikolas having been alive all this time and where he has been!

It looks like Cameron Webber (William Lipton) and Trina Robinson (Sydney Mikayla) are outside of the Corinthos Coffee stand, with a decorated Christmas tree in the background, and Trina is sitting down as Cameron approaches her. Cameron is angry with Trina over something, and demanding of her why couldn’t she have just stayed out of it! She has a look on her face like she wonders why Cameron thinks she did something wrong, when she was just trying to help!

Elsewhere, Dev Cerci (Ashton Arbab) looks like he might have gotten into a little scuffle, with some blood on his jacket and a little on his face as he talks to Josslyn Jacks (Eden McCoy). He tells Joss that this year is going to be better for him. She gives him a look like she cannot believe what he is saying, and appears a bit crestfallen. Perhaps she had some plans of her own for herself and Dev, and Dev just told her something that means her plans are not going to happen?

Back at the Wyndemere wedding that won’t be, Nina Reeves (Cynthia Watros) angrily tells Valentin Cassadine (James Patrick Stuart) what she knows – she is livid as she angrily glares at him and tells him that she has known all along that he was behind the fake daughter scheme that he involved Sasha Gilmore (Sofia Mattsson) in! General Hospital viewers will recall that Sasha tried to protect Valentin, believing he did it all out of love for Nina, which he did, but unfortunately, it looks like love won’t be enough to keep them together.

An equally livid Lulu Spencer (Emme Rylan) also gives someone an earful, probably also Valentin, as she tears into him, telling him he was behind this! She already knew he was behind the fake daughter scheme, that’s why the last wedding didn’t happen and she was the whistleblower!

However, her soaking wet brother Nikolas had just stormed into the room and interrupted the wedding ceremony carrying an equally soaking wet and unconscious Ava Jerome, (Maura West) who Valentin had thrown over the parapet of the castle into the icy waters below, apparently saved by Nikolas. There’s no love lost between Ava and Lulu, but no one deserves that and she doesn’t doubt a bit that Valentin was behind it!

Meanwhile, Nikolas is seething! It is a close head shot so one cannot see if he has put Ava down and someone is calling an ambulance, but Nikolas has murder in his eyes as he heads towards Valentin and slowly and deliberately tells him “YOU – WILL – LOSE – EVERYTHING!” Psychiatrists are medically trained, so at least Dr. Kevin Collins (Jon Lindstrom) is there to tend to Ava and Liesl Obrecht (Kathleen Gati) is there as well to pitch in until Ava can be taken to GH!

General Hospital Recap Friday January 3: Everyone gathers for the wedding – Jason and Sam are split up