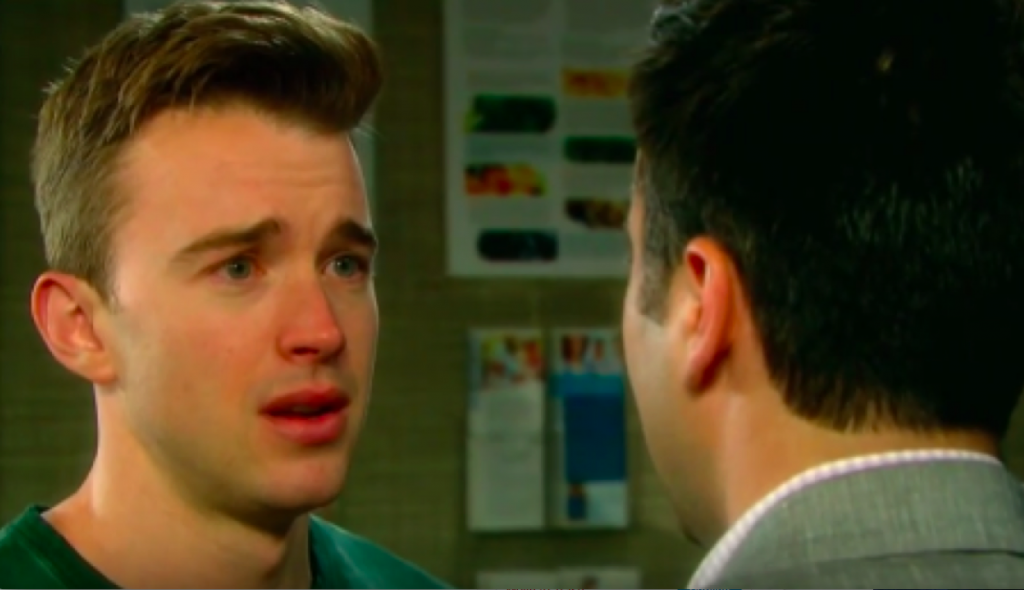 Days of Our Lives spoilers for Friday, January 24 tease that there will be another day of exciting drama and questions answered about what happened during the one-year time jump that started in November!

Days of Our Lives Spoilers – Will Horton Confesses

Will Horton (Chandler Massey) confesses to his husband and father-in-law, Sonny Kiriakis (Freddie Smith) and Justin Kiriakis (Wally Kurth) that he may be the one who caused the accident that was responsible for Adrienne Kiriakis’ (Judi Evans) death, and put Sarah Horton (Linsey Godfrey) and her unborn child (at the time of the wreck) in danger.

Adrienne had lived long enough to tell JJ Deveraux, (Casey Moss) who was working that night and responded to the 911 call Will made, that an oncoming black car swerved into her lane and hit her car, which drove her into the ditch.

Will’s car is black also and he blamed himself from the start, both Will and Adrienne had seen car lights coming towards them and that there was an impact felt. Will had been texting to his mother, Sami Brady DiMera (Alison Sweeney) and his eyes were off the road so he is blaming himself and taking responsibility.

Brady Black (Eric Martsolf) is stunned to learn what Kristen DiMera (Stacy Haiduk) has done, after losing her mind over their newborn baby girl’s death! She bolted out of her hospital room, ripping off monitor wires, and in a blind frenzy, pushed Nurse Haley Chen (Thia Megia) out of her way, not realizing that Haley was standing at the top of a flight of stairs at the time.

Abigail DiMera, (Kate Mansi) who happened to be in the area of the stairs on the floor below the maternity ward finds Haley’s body on the floor. It is apparent she likely died immediately. Kristen has taken off for parts unknown, and Abigail now has the terrible task of telling her brother that his beloved Haley died because of Kristen.

Abigail DiMera finds her brother, JJ, who is still in the hospital on his EMT shift and once Haley is officially pronounced dead, he tries to break the news as gently as she can to him. It may have been an accident, but JJ will not believe it when she tells him that Haley died as a result of a fall down a flight of stairs after being shoved down them by Kristen.

Days of Our Lives viewers will recall that JJ could not cope with the loss of Haley, went back on drugs, and then tried to avenge Haley by killing Kristen at the convent in Rome, where Lani Price (Sal Stowers) also had fled, and Lani had talked him down.

Jack Deveraux, (Matthew Ashford) having been told of the death of his sister Adrienne, goes to tell her a sad goodbye. All of the Deverauxs are devastated, and they still don’t know at this point if Adrienne’s best friend Jennifer Deveraux (Melissa Reeves) will ever come out of her coma, plus in addition to Adrienne, Haley has died also! It will be a tough few months ahead for the Deveraux family!