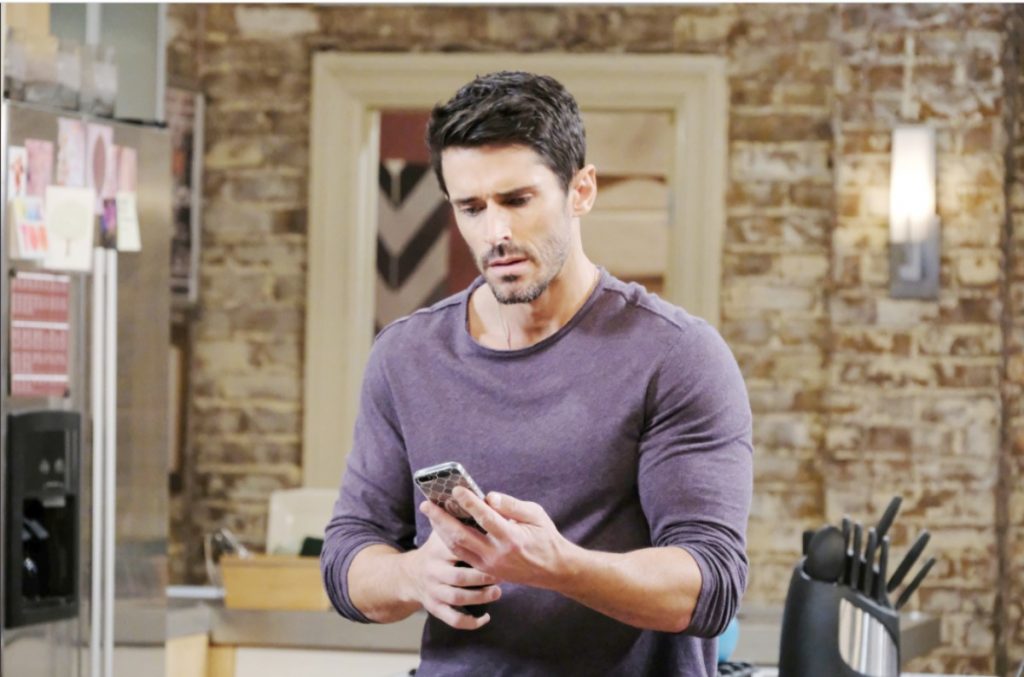 Shawn, however, does not realize there is likely a control device in her neck that Dr. Wilhelm Rolf (William Utay) implanted over a year ago, probably as a booster to the control chip in her brain that Stefano DiMera (then Joe Mascolo) implanted so many years ago, and controlled via satellite through a wrist wash. This may be more than just a simple case of brainwashing!

“Steve Johnson” aka Stefano DiMera in a new body (Stephen Nichols) continues to deceive Kayla Brady (Mary Beth Evans) as he continues to insist that she keeps him and his location a secret, and continues to keep her away from the hospital and her friends and family!

He demands that she stay with him and keep a watchful eye on his wound until he is feeling recovered enough to again go out on his own on the hunt for Stefano! She doesn’t like having to lie, and she’s already had to lie to Justin Kiriakis (Wally Kurth), telling him she had to work on a report all night and not be able to do it at home – telling him he was too much of distraction!

She knows that Julie has to have a new pacemaker and wants to make sure the app she has will work with it, and she also may want to know if there is a way to keep the app from draining Julie’s pacemaker battery since it could point medical personnel and possibly police to something strange going on and detecting the battery drainage coming from an outside source – that could be tracked to her phone!

Meanwhile, Lani Price (Sal Stowers) fears that nothing will stop Eli Grant (Lamon Archey) and Gabi’s wedding since she and JJ Deveraux (Casey Moss) still fear that Gabi has control over Julie’s pacemaker! The pacemaker, of course, has not yet been replaced because Kayla, who is supposed to do the replacement surgery, is helping “Steveano” in the hideout he asked her to hide him in!

Lani is upset – not only does she still love Eli, as long as she can’t be sure that Gabi won’t kill Julie with the app, she still has leverage and she can’t tell Eli the truth. But then she’s not sure if he would even believe her, even if JJ went with her. He’s totally fooled by Gabi and blinded!