Days of Our Lives Spoilers: Marlena Left Shocked – John Tells Her About Orpheus 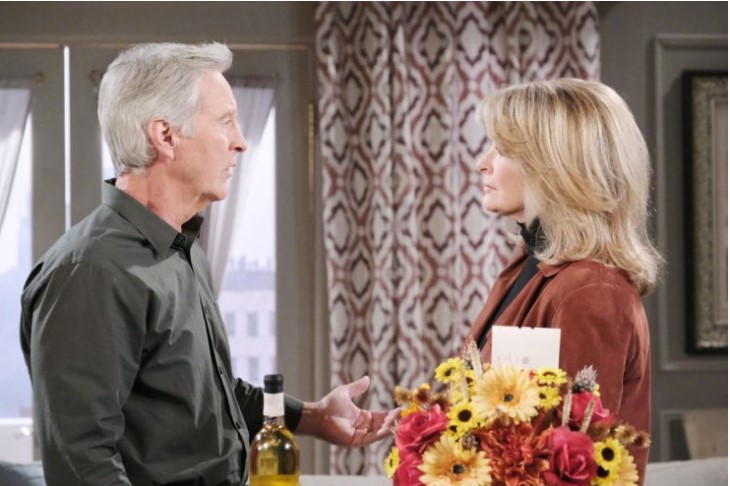 Days of Our Lives spoilers tease that Marlena Evans (Deidre Hall) will be shocked when John Black (Drake Hogestyn) tells her about Orpheus aka Milo Harp (George DelHoyo) being Evan Frears aka Christian Maddox (Brock Kelly) grandfather in an upcoming episode of Days of Our Lives!

Days of Our Lives Spoilers: Is Ben At Risk of Another Psychotic Break? Robert Scott Wilson Teases the Answer

Longtime Days of Our Lives viewers will recall that Milo Harp was once the ISA partner of Roman Brady (Josh Taylor) who accidentally shot Milo’s wife, Rebecca and killed her, and he swore revenge on Roman, who was with Marlena at that time and took out his vengeance on her. In 1986, Orpheus began his revenge on “Roman” who at that time was actually John Black. Orpheus and “Roman” had battles in Stockholm, Sweden.

He was hunted down by the ISA, he kidnapped Marlena from the ISA, after they kidnapped her to force “Roman” into following their orders, and held her hostage. He planned his moves carefully against “Roman”. He wanted him to suffer the same way he had suffered. So when he was supposed to exchange Marlena, he shot her in the back when she ran to him, “Roman” thought she was dead but in reality, she was shot with a tranquilizer, Orpheus explained that he wanted him to understand the same pain he felt when he saw his wife die in front of him.

DOOL Spoilers – Back To Salem

The war between them eventually leads back to Salem where he faced off against the Brady’s, the Salem P.D. and the ISA. He eventually kidnapped Kayla Brady (Mary Beth Evans) and held her hostage until she was saved by Steve Johnson (Stephen Nichols) and his associates. Later, Orpheus blew up “Roman’s house with Marlena in it to make it look like Marlena was dead, when in fact, Orpheus had kidnapped and taken her to his secret hideaway in Europe.

Orpheus made Marlena play mother to his children, a boy, and a girl – and in exchange, he promised her that he would not harm “Roman”, Carrie Brady (Christie Clark) or the twins; Eric Brady (Greg Vaughan) and Sami Brady (Alison Sweeney). Obviously, Christian/Evan is the boy, and Marlena will be dumbfounded as much time as she spent with those children that she didn’t recognize him when Ciara Brady (Victoria Konefal) hauled him into Ben Weston’s (Robert Scott Wilson) execution that she was trying to get stopped, and had forced him to confess at gunpoint.

But then it had been many years since he was a child, and Marlena had been brainwashed by Stefano DiMera (Stephen Nichols) a few times in between as well!

John fills her in about Orpheus having turned up alive, after supposedly being killed after escaping prison with Clyde Weston (James Read) and Xander Kiriakis (Paul Telfer) in 2016 and more recently having aided and abetted Evan/Christian in his kidnapping of David Ridgeway (Caleb and Kyler Ends) which resulted in Evan/Christian returning the child to Rafe Hernandez, (Galen Gering) but that now Orpheus in behalf of Christian/Evan was planning “asserting his rights as the grandparent” in the upcoming family court that would decide whether Rafe could complete the adoption of David or whether parental rights and custody would remain with Evan/Christian, or possibly, Orpheus.

Marlena knows that while Milo Harp never harmed his children when she was caring for them, that neither he nor Evan/Christian would be fit parents for David psychologically and the many years of criminal charges against Orpheus should count against him in family court!

General Hospital Spoilers: Could Obrecht Actually Plead Guilty Just To Keep Maxie And Her Grandson In Her Life?