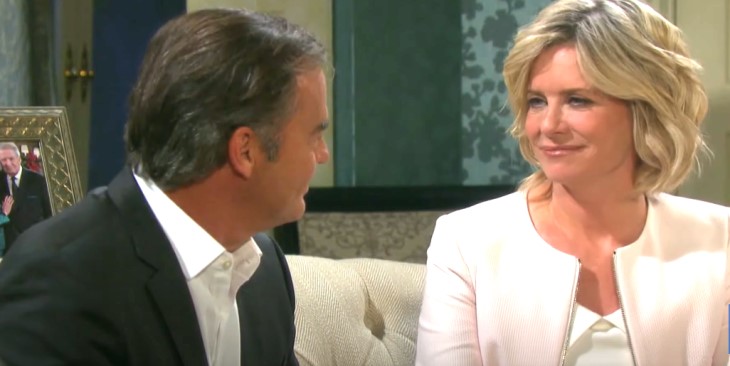 Steve will first tell Kayla to go be with Justin, but instead of making the decision easier for her, like his intention was, she gets mad! She doesn’t like it when Steve makes decisions for her, and she never has! She’s angry, and she’s hurt, and as far as she is concerned, it’s more of a control trip and he makes the decision for her and their family because he always thinks he knows better than they do, and Kayla just can’t stand that; she’s mad as a wet hen when he tells her this!

Truth is, she loves Justin and wants to be with him, but Steve making that decision for her just absolutely rubs her the wrong way – Steve didn’t ask her about it – he just did it! Something subconscious inside of her may be telling her if Steve really loved her he would fight for her, and also if Justin really loved her he would fight for her as well but her heart and her commitment at the end of the day is with Justin. She is angry and frustrated to tears and leaves Steve’s hospital room. But, as luck would have it, she runs smack into Justin!

Justin, of course, seeing Kayla coming from the direction of Steve’s hospital room in tears, immediately approaches her and asks what is wrong! She tells him that Steve decided, not her, that she should be with him, Justin, but she’s so upset it doesn’t quite come out the way she meant. Justin takes it that she is upset over Steve’s rejection of her, meaning he is the second choice!

Justin tells her he wants to be THE ONE and not the DEFAULT, and he doesn’t want to play second fiddle to her past great love with Steve, and quite frankly, he’s a little confused why Steve would even tell her that since he has told him in no uncertain words that Kayla is HIS wife just a day or so ago!

Days of Our Lives Spoilers: Stefan Used As Dramatic Deception – Gabi’s Weakness Used To Take Her Down? https://t.co/btKpezPyXI pic.twitter.com/KJUcIvsgML

As Kayla and he continue to talk this out, Kayla finds the words that Justin will understand, and that she is not so hurt and angry over Steve rejecting her, as they had been having problems when he had left on his last ISA trip, the one where he was intercepted on the way home from by Stefano DIMera’s (Stephen Nichols) henchmen, but upset over Steve making decisions for not only her but their children, which he also had done frequently in the past, acting like he knew better than they did and they could not be trusted to make their own wise decisions!

Justin has a better understanding of the situation now, and as they continue to talk things out, she realizes that Steve is probably right in this case – it’s a better choice for Kayla to be with Justin, and she tells him so!

The Bold and the Beautiful Spoilers: Bill Wants To Keep His Family Together & Wants To Destroy Quinn