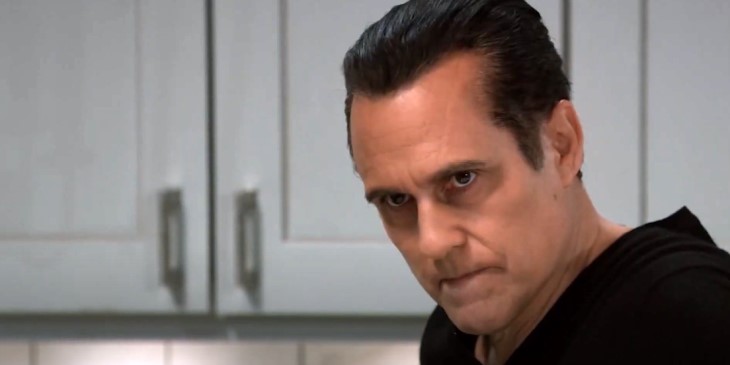 General Hospital viewers will recall that Mike recently had an episode at Turning Woods Memory Care center that caused him to need to spend a little time at General Hospital. Dr. Portia Robinson (Brook Kerr) had been tasked with his care, and apparently, he had injured himself in a fall and hadn’t told anyone about it at the care center and the injury had recently been discovered – but Mike didn’t want to get up out of bed, didn’t want to talk to anyone and didn’t want to eat!

This, unfortunately, is what happens in the final stages – and Mike is rapidly deteriorating to the point where his brain will not control his internal organs, including his heart, and he will die. There is another incident, and Sonny gets a call to come to the care center, and misses a meeting with Cyrus Renault (Jeff Kober) over it, although it is likely that Jason Morgan (Steve Burton) goes in Sonny’s place so as not to appear to completely ghost Renault!

Sonny now has an appointment to discuss options for Mike’s continuing care – and appointment that Sonny has been dreading, but has known would eventually come. Sonny has just been hoping that this time in Mike’s Alzheimer’s journey was not accelerating so quickly!

The medical team caring for Mike has to know what Sonny’s wishes for Mike’s last days are when he is no longer to communicate and when his body starts to fail due to lack of control by his brain. This kind of conversation devastates Sonny, especially when they start talking about DNRs, or “Do Not Resuscitate” orders – meaning, if Mike’s heart stops not to do CPR, not to put him on a ventilator, and not to take any extraordinary means to prolong his life.

Sonny is forced to listen to a litany of nightmarish situations that could arise, and that he needs to sign off on what should be done, should they arise. Sonny is Mike’s only living relative aside from Avery Corinthos-Jerome (Ava and Grace Scarola) and Gladys Corbin (Bonnie Burroughs) and Brando Corbin (Johnny Wactor), but they are not close enough of relatives and Avery is obviously too young so that leaves Sonny to bear all the weight of Mike’s medical proxy, meaning he has to make all of his father’s medical decisions, and that includes his continuing care. This is a huge weight on Sonny’s shoulders!

The Bold and the Beautiful Spoilers: Wyatt Is Shocked When Quinn Takes Katie’s Side Regarding Flo And Sally