Days of Our Lives Spoilers: Kate Applies For A Job With Abe Out Of Desperation 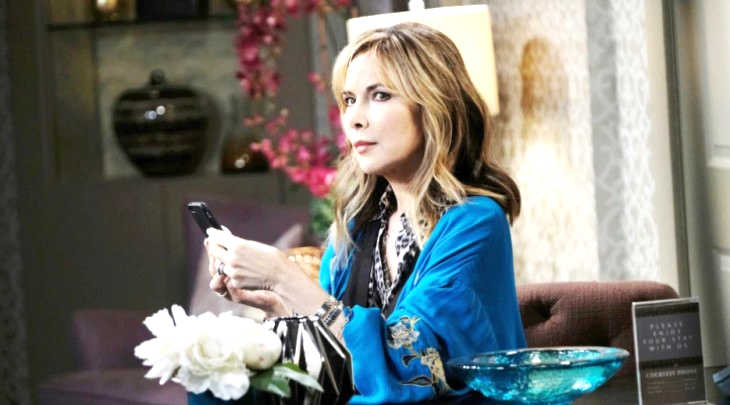 Days of Our Lives spoilers tease that Kate Roberts (Lauren Koslow) will apply for a job with Abe Carver (James Reynolds) out of desperation, in an upcoming episode of Days of Our Lives!

Kate isn’t yet broke, having money put away, but she’s bored! Desperately bored! That’s one reason she worked as a waitress for Roman Brady (Josh Taylor) when she’s had plenty of experience in the business world. Kate was tired of the office politics and dirty dealing of corporate life and decided just to leave that all behind and do something simple for a while. But now that Roman’s fired her, she needs to do something with her time besides twiddle her thumbs!

Kate has plenty of varied experience besides being a CEO at several different companies, a waitress and – a prostitute! If she can run a whole corporation, she has no doubt she can run an office, and she sees that Abe is looking for an office manager at the mayor’s office – basically, the same thing that Sheila Watkins (Tionne Watkins) was doing when she worked for Abe.

So she goes and applies for the job at the mayor’s office and hopes she gets the job, as she is going crazy and needs something to do, and charitable work is really not Kate’s thing! Kate has experience in fashion, but unlike Sheila, she won’t give Abe fashion advice and she won’t mess up his filing system – if he has ever figured it out and changed it back to his filing system when Sheila left and before Jack Deveraux (Matthew Ashford) took over thanks to Eve Donovan’s (Kassie DePaiva) dirty campaign tricks!

Abe is puzzled when she comes in for her interview – even though he knew that she had worked for Roman for quite a while after being ousted as CEO of DiMera by Wei Shin (Michael Hagiwara). But then she had nearly died in-between times too, so although he’d never been nosy enough to ask her why she had been working as a waitress, he has to ask her now why she is seeking employment so beneath her talents and abilities! He hates to think that perhaps she has fallen on hard times, and tries to be as diplomatic as possible as he poses the question to her.

Kate simply tells him the truth – she was tired of all the corporate drama that is involved with working as a CEO, tired of dealing with mergers, acquisitions, and especially having to deal with company images! She tells him that she just wanted to try a simpler life and that to her at this time in her life, work is sort of a hobby, although she doesn’t feel right just living off her savings and not doing anything.

Days of Our Lives Spoilers: Stefan Used As Dramatic Deception – Gabi’s Weakness Used To Take Her Down? https://t.co/btKpezPyXI pic.twitter.com/KJUcIvsgML

She wants to feel like she is making a contribution to whoever she works for, even if she’s not at the top because she no longer wants the responsibility of being at the top! Abe seems impressed – and is satisfied with her motivations and especially thankful for her honesty. He has some more people to interview for the position, and he’ll be back in touch!