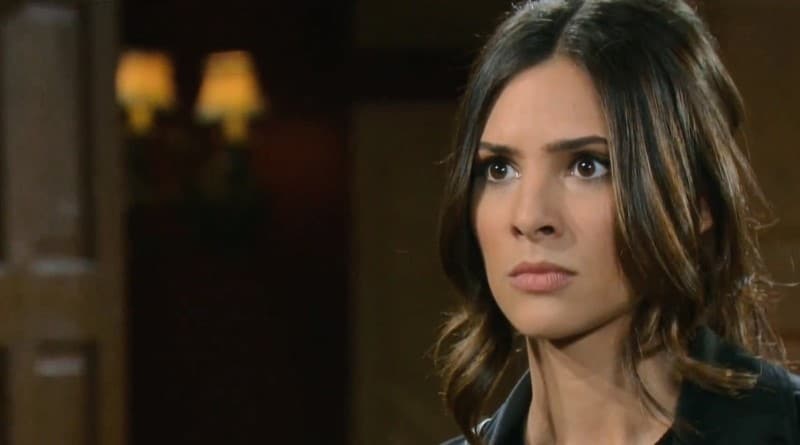 As Days of Our Lives viewers will recall, Gabi’s hold over Julie is the app she has on her phone that she can control Julie’s pacemaker with, therefore, controlling her heart rate. If she turns it down too low, Julie could die. If she turns it too high, Julie could die. So Gabi basically holds Julie’s life in her hands! JJ and Lani have been trying to figure out a way to take Gabi’s control over Julie away. JJ had tried to get into her phone to disable the app, but he wasn’t able to get past the security steps on the phone to be able to do so. It sounds like they will come up with a plan that will work – at least temporarily and hopefully long enough to convince Eli Grant (Lamon Archey) – or SOMEONE – to consider what they are saying and to look into the app on the phone; perhaps even Lani’s father, Abe Carver (James Reynolds). In order to do this, they may just have to steal Gabi’s phone!

If They Steal Gabi Hernandez DiMera’s Phone, It Will At Least Buy Them Some Time

Days of Our Lives Spoilers: Ciara Comes Up With New Theory About Who Killed Jordan #DOOL #Days #DaysOfOurLives https://t.co/JHtXytNa5G

If Lani and JJ decide to steal Gabi’s phone, it will at least buy them some time! They can get the phone to an IT person somewhere or an IT department that can look more into this app and possibly be able to get past the security to disable it. But the downside is that Gabi can quickly buy herself a new phone and download a new app – IF it is an app that works on ANYONE’S pacemaker. If it is not, and has to be synced with a certain pacemaker, and they come as a set – which likely is what happened when Julie’s pacemaker was put in – then it would be much more difficult for Gabi to engineer Julie needing a different pacemaker! It seems like stealing the phone may be the best option; although a temporary one, perhaps, it may be the best chance they have to take away Gabi’s control over Julie and her heart!

There will have to be a distraction to separate Gabi from her phone, obviously; since desperate times require desperate measures, perhaps even a purse snatching may be required, if her phone is in her purse! Either way, Gabi will have to somehow be separated from her phone and Lani and JJ will need to work quickly to ensure that she doesn’t regain control over Julie’s heart and life in some other way until they can take Gabi down!