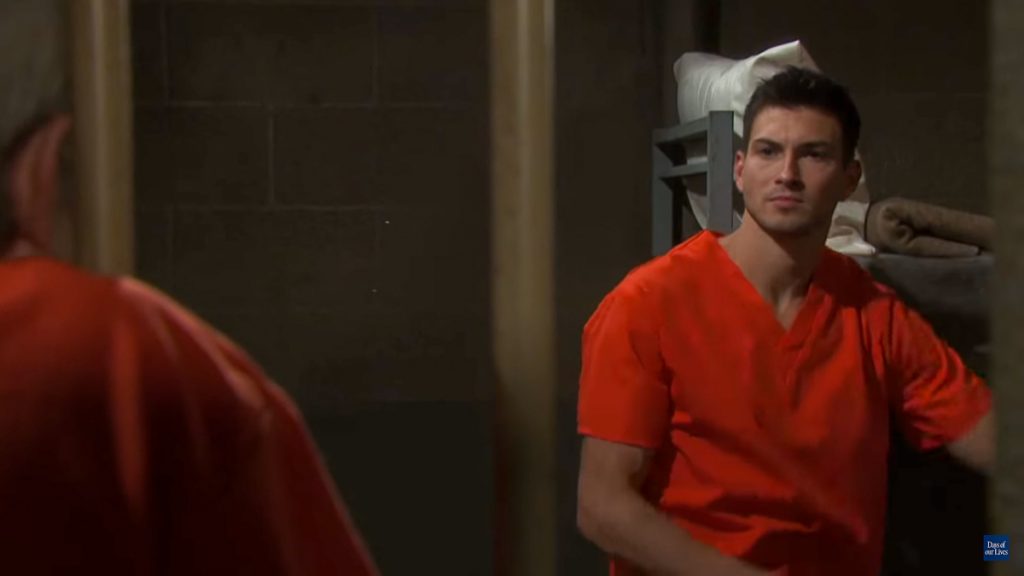 This week, pursuits and rescue missions abound as John Black (Drake Hogestyn) and Marlena Evans (Deidre Hall) have both been captured and told separately that each other is dead! In one location, Princess Gina Von Amberg aka “Hope Brady” (Kristian Alfonso) consoles John over Marlena’s death, while in another location, “Steve Johnson” aka Stefano DiMera (Stephen Nichols) consoles Marlena over John’s death!

Meanwhile, Stefano’s son and his wife, Chad and Abigail Deveraux DiMera (Billy Flynn, Kate Mansi) are puzzled over a duplicate of the portrait of Stefano that had been missing from the DiMera mansion from over a year, and now they have found an exact duplicate of the portrait, only instead of Stefano’s face and body, it’s Steve Johnson’s! Detective Rafe Hernandez (Galen Gering) and former police chief Roman Brady (Josh Taylor) head for Prague, the last known location of Stefano DiMera, in an intended rescue mission of Hope and Marlena. Meanwhile, in an unknown location in Prague, Princess Gina drugs John, and goes for broke to win him over! In Stefano and Gina’s lair back in Salem, “Steve” reveals his true identity as Stefano DiMera to Marlena, and Chad and Abigail question Kristen DiMera (Stacy Haiduk) about the portrait of Steve as Stefano.

Days of Our Lives Spoilers: Sarah Horton Declares Her Love For Xander Kiriakis

Xander Kiriakis (Paul Telfer) is shocked and blindsided when he walks in on what he thinks is Eric Brady (Greg Vaughan) and Sarah Horton (Linsey Godfrey) finishing up after an illicit quickie in Sarah’s bed, since they are in a state of undress! However, after the embarrassed couple finish dressing and Eric leaves, Sarah tells him it wasn’t what it looked like – although it almost was!

They had been comforting each other over baby Mickey Horton’s (the May twins) devastating illness and the fact that neither of them was a donor match for Mickey, for whom a bone marrow transplant is her only chance at life. Things got a little carried away between Sarah and Eric but she realized she couldn’t go through with it because she’s in love with Xander! He looks stunned and asks, “Me?!” They proceed to have their own romantic evening!

Days of Our Lives Spoilers: Still Hope For WilSon, Can Will And Sonny Overcome Murder Drama And Evan Fiasco? https://t.co/vsrUDtzkWh pic.twitter.com/QngkiJlpXD

General Hospital Spoilers: Laura More Determined Than Ever Before To Clean Up Waterfront

Two couples reunite this week as Nicole Walker (Arianne Zucker) comes clean to Eric about her and Brady Black’s (Eric Martsolf) relationship having been a ruse to keep Kristen away from him. However, that didn’t work so well, with Brady and Kristen reuniting as a couple after having re-bonded over grieving their daughter Rachel Isabella Black together. Eric and Nicole reconcile and he moves back in with Nicole.

Ciara Brady (Victoria Konefal) fears she has let Ben Weston (Robert Scott Wilson) down while she wasted so much time trying to exonerate him based on things she had heard her grandfather, Victor Kiriakis (John Aniston) and Xander talking about, only to find out it wasn’t Ben they had framed for Jordan Ridgeway’s (Chrishell Shause) murder, it was Will Horton (Chandler Massey) for Adrienne Kiriakis’ (Judi Evans) death in an automobile accident! However, she hits upon a new theory regarding Jordan’s killer, and Clyde Weston (James Read) also tries to help his son by trying to talk him into escaping with him! Ben’s execution is drawing near, so this may be the only way, and Will even joins in with them to help with their escape plan!

General Hospital Spoilers: Laura More Determined Than Ever Before To Clean Up Waterfront

The Bold and The Beautiful Spoilers February 3 to February 7: Liam Realizes That His Kiss With Steffy Is Complicating Things