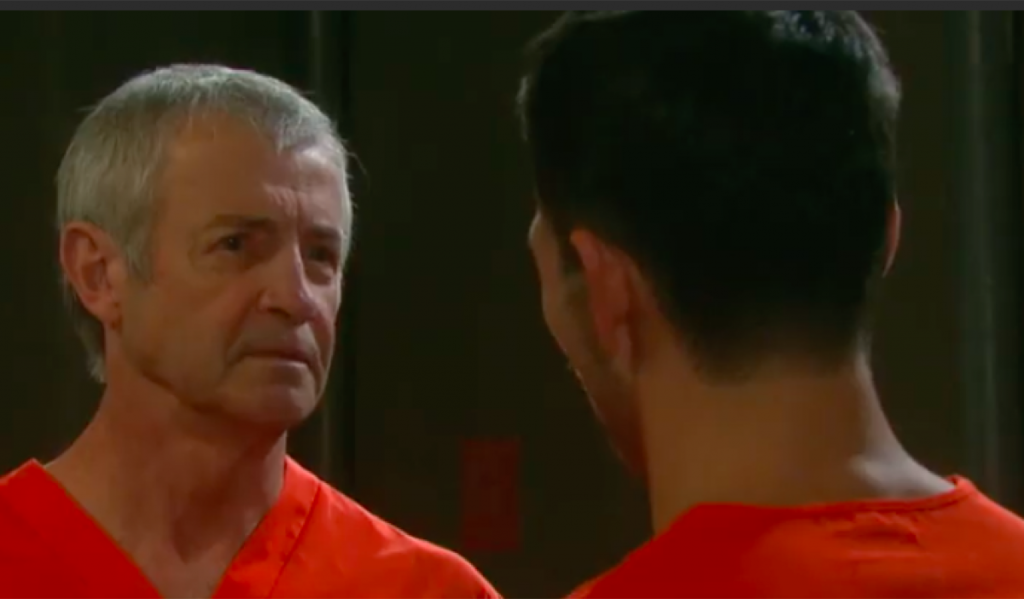 Having lost his last appeal, Ben Weston (Robert Scott Wilson) is now officially on Death Row waiting for his execution date to be announced. All resources have been exhausted and Justin Kiriakis (Wally Kurth) was not able to convince the appeals board that Ben does not deserve to die and was unable to provide any substantiated proof that Ben did not murder his sister, Jordan Ridgeway (Chrishell Stause).

His father, Clyde Weston (James Read) comes up with the not so bright idea that they should break out of prison! Ben is not likely to want to jump out of the frying pan into the fire so he will surely tell him it’s a bad idea and breaking out and going on the run will only make things worse, at least for Clyde!

Hattie Adams, (Deidre Hall) recently got hired by Roman Brady (Josh Taylor) for his second waitress at Brady’s Pub, after another waitress quit, not having been able to handle Kate Roberts’ (Lauren Koslow) “strong personality”. Roman also let Hattie stay in another room over the pub, and Kate stays in yet another room so the two constantly are in each other’s orbit, no matter if they are downstairs working in the pub or upstairs in their rooms or passing each other in the hall! Because of such close contact, Hattie is likely to overhear things Kate says that she doesn’t want overheard, and even if she doesn’t hear much she may hear too much – especially if “Katerina” happens to be talking to “Steveano” meaning Stefano DiMera (Stephen Nichols) who is in Steve Johnson’s (Stephen Nichols) body!

“Steve Johnson” reveals his true identity as Stefano DiMera to Kristen DiMera (Stacy Haiduk) after going to see her at her room in the Salem Inn. There will be many questions from Kristen, and possibly tests, because she won’t believe him at first so he will have to prove that he is really her father, and that “The Phoenix” has risen again but in a different body this time – the one of a man he hates, which Kristen might find a supreme irony in! Longtime Days of Our Lives viewers will remember that Stefano adopted Kristen and her brother, Peter Blake (Jason Brooks) as small children so Kristen may have to ask him questions relating to her childhood or he may have to bring up things that only she and he would know.

Days of Our Lives Spoilers: Clyde Wants To Break Out With Prison – Will Ben Come Up With A New Scheme? https://t.co/S0OonfLDGL pic.twitter.com/AjZzsbcuyn

Ciara Brady (Victoria Konefal) will be blindsided when she goes to her grandfather’s hospital room and asks Victor Kiriakis (John Aniston) nicely guilts him into telling her the truth, phrasing it “If you really loved me, you would tell me the truth”, the truth being, as far as she knows, that he was behind the framing of Ben for the killing of his sister Jordan. He tells her, “Okay, I will tell you the truth, but it’s not what you think it is. You don’t understand, Ciara. The innocent man that we sent to prison is not Ben, it was Will!” Now she has to choose whether to tell Will, in addition to being back to square one with Ben’s situation and him being on death row!